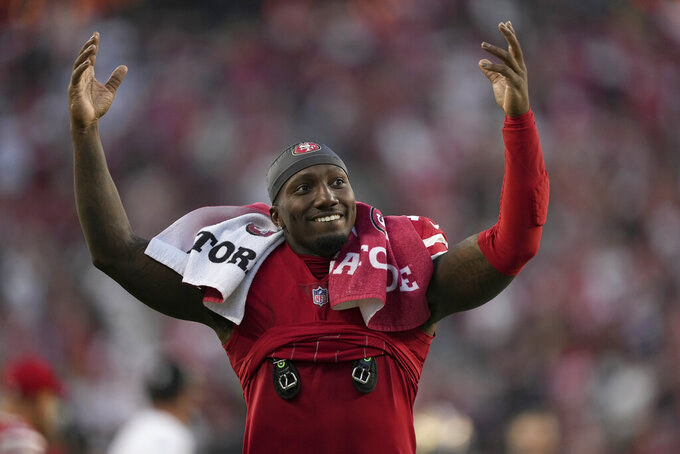 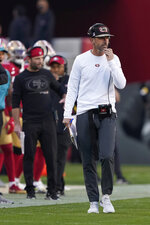 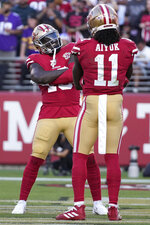 SANTA CLARA, Calif. (AP) — Now that the San Francisco 49ers have won three straight games to get back into the playoff race, they will need to deal with the absence of two key players for at least one week.

Do-everything receiver Deebo Samuel will likely miss one or two games after injuring his groin and linebacker Fred Warner also will miss a game with a hamstring injury after both got hurt in the 34-26 win over the Minnesota Vikings on Sunday.

But the Niners (6-5) felt fortunate that the injuries weren't more serious.

“It was just a strain and strains are usually anywhere from one to two weeks, which I think was very good news considering what it could have been,” coach Kyle Shanahan said Monday.

But even if it's only short term, those absences will still be significant. Warner has started every game since being drafted in 2018 and makes all of the defensive calls.

Samuel has been the team's top receiver as well as a rushing threat, making it difficult for any one person to replace him. But the Niners have been running the ball effectively with rookie Elijah Mitchell and have been getting much more consistent play from receiver Brandon Aiyuk in recent weeks.

Jauan Jennings has also emerged as an option of late and star tight end George Kittle is healthy once again.

“He’s been a big part of our offense, but I think we’re in a spot right now that we can overcome that,” Shanahan said about Samuel's absence.

The 49ers have been getting plenty of good news of late after rebounding from a stretch when they lost five of six games.

They have won the past three games and currently stand in sixth place in the NFC as they have benefitted from other contenders slipping in recent weeks.

“You always have it in the back of your head, the position where you’re at and everything and the other teams around you,” quarterback Jimmy Garoppolo said. “But I think we’ve been taking a week-by-week mentality and just trying to get one win at a time and it’s done well for us the last three weeks.”

Running game. The Niners have been committed to the run the past three weeks and the results have paid off. San Francisco is averaging 41.7 runs a game in that span for an average of 178.3 yards per game. The game Sunday was the most productive as San Francisco averaged 5.33 yards per carry and gained 208 yards behind Mitchell's 133-yard performance.

Kick coverage. After scoring to go up 31-20 in the third quarter, the Niners kicked deep and allowed a 99-yard kickoff return TD to Kene Nwangwu. That was the first kick return score against the 49ers, excluding onside kicks, since Leon Washington had one on Dec. 12, 2010, for the Seahawks.

Al-Shaair also had to call the defensive signals late in the game after Fred Warner and Dre Greenlaw left with injuries.

Robbie Gould. The Niners had a chance to seal the game in the final two minutes, but Gould missed a 42-yard field goal that kept the lead at eight points. The miss didn't end up too costly as the defense came up with the stop to preserve the win.

The Niners had several other injuries besides Samuel and Warner. LB Dre Greenlaw irritated the core injury that had sidelined him since in the opener and is day to day. ... RB Trey Sermon (ankle) could go on short-term IR. ... DL Kentavius Street (wrist) is day to day and LB Marcell Harris is in concussion protocol.

5-5-1,000. Samuel ran for two TDs on Sunday to give him five TD runs to go along with his five TD catches. Samuel also eclipsed the 1,000-yard receiving mark for the season, joining Marshall Faulk (1999) and Roger Craig (1985) as the only players to hit all three marks in the same season.

The 49ers visit Seattle on Sunday.