'Today we say no more': Jaguars march to sheriff's office 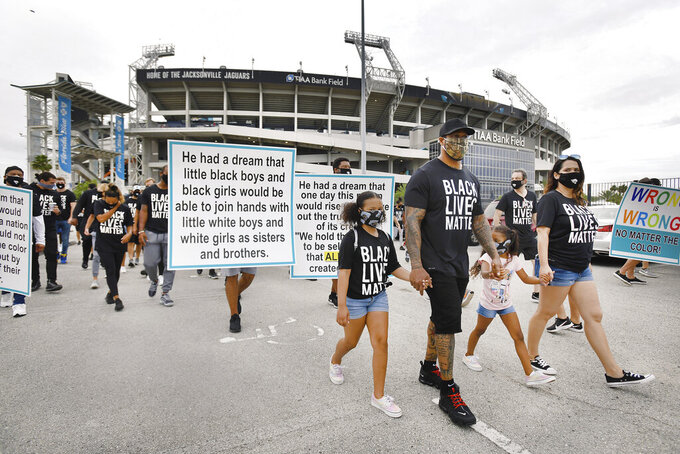 Jacksonville Jaguars assistant defensive line coach Dwayne Stukes walks with his family near the front of the line of players, staff and family members as they start a march from TIAA Bank Field to the Jacksonville Sheriff's office headquarters, Friday morning, June 5, 2020, in Jacksonville, Fla., to protest against inequality and police brutality. (Bob Self/The Florida Times-Union via AP)

The Jacksonville Jaguars protested against inequality and police brutality on Friday, marching from their stadium to the steps of the sheriff’s department.

“Today we say no more,” wide receiver Chris Conley said. “Today we see a nation that can’t await change, a city that won’t sit still or be quiet.”

The march included Joshua Dobbs, Brandon Linder and Josh Lambo of the Jaguars along with family members. Coach Doug Marrone, general manager Dave Caldwell and assistant coach Terry Robiskie also walked in what the team called an attempt to “raise awareness for racial injustices against the Black community,” with many wearing “Black Lives Matter” T-shirts.

The Jaguars started their march at 9:04 a.m. local time to signify the local 904 area code.

The protest came two days after owner Shad Khan spoke against racism in a letter on the team website. He promised then the franchise would work toward a “timely response.” Former Jaguars receiver Ernest Wilford, now an officer at the department, joined them on the steps at the sheriff's office.

Conley spoke at the Jacksonville Sheriff's Office. He said he cried when he saw the video of the shooting death of Ahmaud Arbery, a black man who was jogging when killed Feb. 23 in Georgia.

Marrone said the Jaguars are working on actions they believe can make a difference. He also challenged the white community to step back, listen and learn.

“Let’s not make the same mistakes we've made,” Marrone said. “We need to stand together white and black to make this movement work.”

With the NFL allowing only coaches to return to their offices Friday and players still working remotely because of the pandemic, several Jaguars could not take part in the march.

The Jaguars' protest is the latest involving professional athletes since the killing of George Floyd in Minneapolis.

Two-time NBA MVP Stephen Curry marched in a protest Wednesday along with his wife and four teammates from the Golden State Warriors, including Klay Thompson. Shaq Thompson and four other Carolina Panthers walked in a protest march Monday in Charlotte, with Thompson helping lead the way.

On Saturday, several Denver Broncos and coaches plan to march to the Colorado capitol, the site of daily demonstrations. Safety Kareem Jackson organized the gathering after saying Tuesday that players need to do more than tweet and talk because they all see what’s going on.