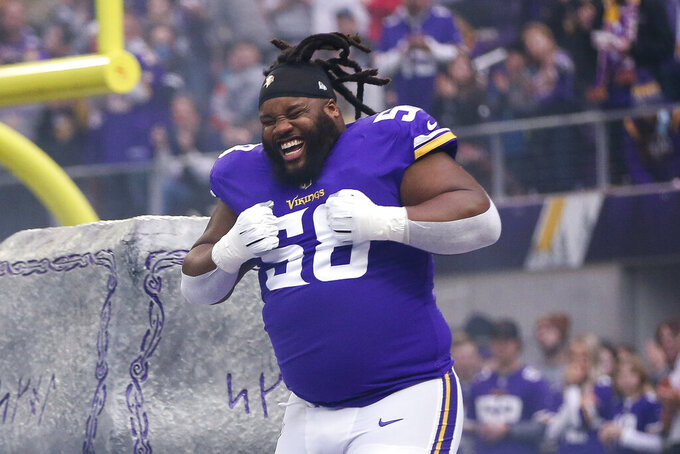 FILE - Minnesota Vikings defensive tackle Michael Pierce (58) reacts during his introduction prior to an NFL football game against the Los Angeles Rams, Sunday, Dec. 26, 2021 in Minneapolis. The Minnesota Vikings kept up their defensive line shuffle by finalizing the release of nose tackle Michael Pierce on Tuesday, March 15, 2022, for salary cap savings ahead of free agency. The seventh-year veteran played in only eight games for the team.(AP Photo/Stacy Bengs, File)

MINNEAPOLIS (AP) — The Minnesota Vikings agreed to terms Tuesday on a two-year, $12 million contract with linebacker Jordan Hicks, continuing a revamp on defense to fit a new scheme and work around the salary cap.

Hicks spent the last three seasons with Arizona. Because the Cardinals released him last week, he was eligible to get a deal formally done with any team prior to the start of the new league year on Wednesday. Otherwise, players can't sign with new clubs until then.

The 29-year-old Hicks was a third-round draft pick by Philadelphia in 2015 who played his first four seasons with the Eagles, winning a Super Bowl in 2017-18. He has started 51 straight games — plus one in the 2021 playoffs for the Cardinals — for the third-longest active streak by NFL linebackers.

The Vikings also kept up their defensive line shuffle by finalizing the release of nose tackle Michael Pierce for salary cap savings ahead of free agency. The seventh-year veteran played in only eight games for the team.

The move will save more than $6.2 million on Minnesota's cap number. Pierce will leave a $4 million charge in dead money for the remaining prorated portion of the bonus he signed for in March 2020.

The Vikings reached a contract agreement late on Monday, according to multiple reports, with free agent and former Buffalo defensive tackle Harrison Phillips in a swap of run stoppers. Phillips will enter his fifth NFL season.

Pierce opted out of his first year with the Vikings due to COVID-19 concerns related to his chronic asthma, so his contract rolled over to 2021. The 6-foot, 340-pound Pierce played well when he was available, with three sacks in eight games while playing roughly half of the snaps.

He suffered a triceps muscle tear in practice and tried to play through it against Cleveland on Oct. 3, but he aggravated the injury and wound up missing the next seven games. Pierce also was sidelined for the final two games with an illness.

Minnesota's biggest-money addition in free agency last season was defensive tackle Dalvin Tomlinson, who solidified the 3-technique position that had long been in flux. But a team that has had so many strong defensive lines over the years has seen this critical group suddenly dry up.

Donatell's system uses a 3-4 alignment as the base package, but regardless of the role of the defensive end — in the new scheme or the old one under former head coach Mike Zimmer — the Vikings badly need some pass-rushing help.

Danielle Hunter still profiles as a standout at age 27, but due to two fluke injuries he has played in only seven of 33 games over the last two years. He has an $18 million roster bonus due on Sunday, a deal that appears bound for renegotiation.

Everson Griffen will become a free agent, with his playing future unclear. D.J. Wonnum, who had eight sacks last season, is the only other pass rusher with significant experience on the roster.

Outside linebacker Anthony Barr is Minnesota's highest-profile player eligible to become an unrestricted free agent when the market formally opens for signings and trades on Wednesday afternoon. The Vikings previously gave a one-year extension to quarterback Kirk Cousins to lower his salary cap hit by $14 million and extended a one-year contract offer to restricted free agent kicker Greg Joseph that gives them the right to match any offer he were to get from another club.