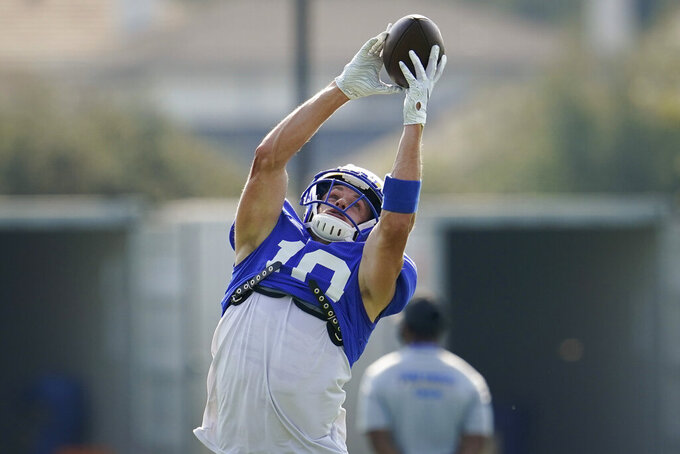 THOUSAND OAKS, Calif. (AP) — Receiver Cooper Kupp has agreed to a three-year contract extension through 2023 with the Los Angeles Rams.

Neither the team nor Kupp's management immediately disclosed the financial terms of the deal reached Saturday, a day before the Rams' season opener against the Dallas Cowboys in brand-new SoFi Stadium.

Kupp has been a steady, productive receiver since the Rams chose him in the third round of the 2017 draft. He was Los Angeles' top pass-catcher last season, leading the team with 94 receptions for 1,161 yards and 10 touchdowns.

A precise route-runner with a knack for big, rambling gains after key catches, Kupp was an immediate success as a rookie. The Eastern Washington product had 69 catches for 869 yards on coach Sean McVay's first team in Los Angeles, followed by eight catches in his NFL playoff debut.

Kupp missed the second half of the 2018 season with a torn ligament in his knee, preventing him from playing in the Rams' postseason run to the Super Bowl.

He rebounded with an outstanding season in 2019 alongside fellow starter Robert Woods, and the Rams made clear their intention to lock up Kupp in an extension.

The deal wraps up another important piece of offseason business for the Rams, who gave a five-year, $105 million extension to star cornerback Jalen Ramsey earlier this week.

McVay expressed optimism earlier this week that the Rams would be able to get a deal done with Kupp before the regular season began. Kupp echoed those sentiments, saying he would “love to be a Ram long-term. I love it here.”

The Rams also hoped to sign safety John Johnson to a long-term deal before he becomes a free agent next season, but haven't reached an agreement.