WWE star Goldberg gets tough in helping Texans in need 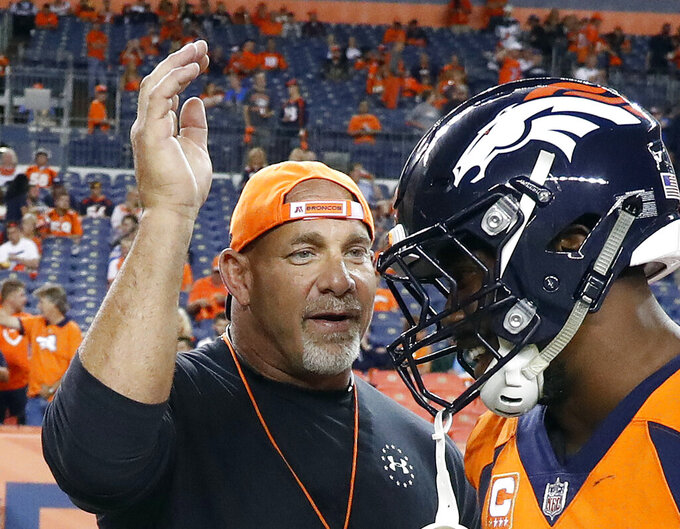 FILE - In this Sept. 11, 2017, file photo, professional wrestler Bill Goldberg, left, greets Denver Broncos outside linebacker Von Miller prior to an NFL football game against the Los Angeles Chargers in Denver. Bill Goldberg punched through the drywall in his garage one day this week -- not as some sort of masochistic training for his next WWE match -- but for repairs on property damage suffered as a result of the deadly Texas storms. The WWE Hall of Famer spent about 12 hours Wednesday, Feb. 24, 2021 replacing pumps in the wells on the ranch he owns just outside San Antonio, and then it was off to work on a garage and pool house that had been flooded. (AP Photo/Jack Dempsey, File)

Bill Goldberg punched through the drywall in his garage one day this week -- not as some sort of masochistic training for his next WWE match -- but as he repaired property damage suffered as a result of the deadly Texas storms.

The WWE Hall of Famer spent about 12 hours Wednesday replacing pumps in the wells on the ranch he owns just outside San Antonio, and then it was off to work on a garage and pool house that had been flooded.

“We’re much luckier than 98% of the people who fared through the storm,” Goldberg said. “It’s hard for me to complain, it really is.”

Goldberg said Thursday marked the eighth straight day his family had no running water and had to juggle the responsibility of caring for the “plethora of rejects” of nearly 50 animals on the ranch. The animal family expanded when three calves and two sheep were born in the midst of recent blackouts that left 4 million Texas customers without electricity and heat during a deadly winter freeze.

“We had to grab them and save their lives, basically. And that means bottle-feeding them now,” he said. “My wife is the one who takes care of that duty and she enjoys it but it’s been extremely stressful. You know, boiling snow throughout the storm for our animals has just been tough.”

The 54-year-old Goldberg built a career on toughness that included a stint in the NFL and a 25-year professional wrestling career. He burst onto the wrestling scene in the late 1990s with the now-defunct WCW and rolled off a winning streak highlighted by a win over ″Hollywood″ Hulk Hogan for the championship. He moved on to WWE and still competes sporadically for the company that included a match last month at the Royal Rumble.

With his farm and family commitments, Goldberg noted it’s “harder and harder” to get pulled away from home.

He kind of feels like one of the family, though, when’s he on the set of the ABC sitcom “The Goldbergs.” Goldberg has made appearances -- no, not as a member of the suburban Philadelphia Goldberg family -- but as “Coach” Nick Mellor. He guest stars again in Wednesday’s episode and runs into a confrontation with William Penn’s pesky new Quaker Warden, Beverly Goldberg.

“It’s ironic that I’m the only Goldberg on the entire set,” he said. “I don’t know which seat to sit in when I get off set. Every seat says ‘Goldberg’ on it.”

Goldberg said he can’t bring himself to watch his wrestling matches -- or even a recent WWE Network documentary on his undefeated streak -- but he makes a point to round up the family and watch “The Goldbergs.”

“How can you not be funny around the number of actors who are actual comedians? It just rubs off through osmosis,” he said.

He’s not ready to stick a pitchfork in his wrestling career.

Goldberg returned to great acclaim in 2016 after a 12-year break from WWE. He beat Brock Lesnar in his first match back and twice won the WWE Universal championship. Goldberg lost his last two matches in empty arena matches because of the pandemic -- to Braun Strowman last year at WrestleMania and then to Drew McIntyre at the Rumble. His match against McIntyre took place in front of fans that appeared live on digital video boards WWE dubbed the ThunderDome.

“It’s very difficult, but character-wise, I’m just focused in on who I’m wrestling,” he said. ”(Hulk) Hogan taught me years and years ago that facial expressions and looking to the crowd is as just as important, if not more important, than the actual match itself. When you take that out of it, for a guy such as myself who does limited things in the ring, it kind of makes it more difficult. But I go out and do my thing, do what’s asked of me, and I’m honored and privileged to still be a part of it and represent WWE.”

Still a major attraction, Goldberg said he fancied himself these days more of a relief pitcher who could be called on in any situation. Goldberg said he’s contractually obligated for one more match this year with WWE and two more each year for the remainder of his contract. While former wrestlers of his stature such as Sting and Big Show recently left WWE for the upstart All Elite Wrestling, Goldberg said he’d “love to finish out my wrestling career with WWE.”

Goldberg wants to be known just as much as a friend of his community. He’s taking his teenage son and other friends to an area Salvation Army on Friday to pass out water and food to people in need.

“There’s always someone that needs help more than you do,” Goldberg said. “It seems as if Texans are helping out Texans and that’s why I like the place.”