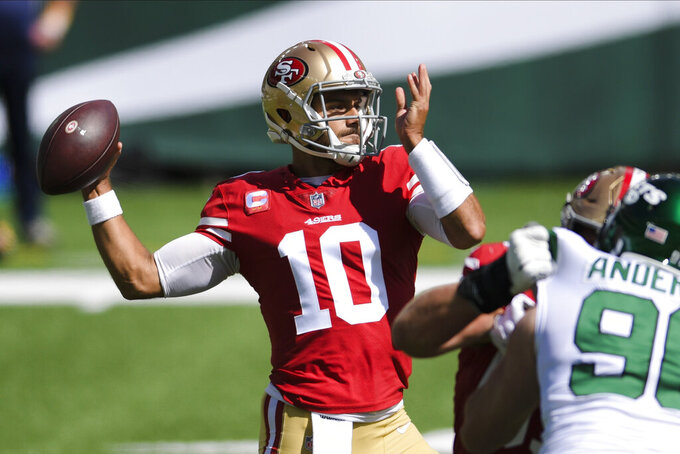 San Francisco 49ers quarterback Jimmy Garoppolo (10) throws a pass during the first half of an NFL football game against the New York Jets, Sunday, Sept. 20, 2020, in East Rutherford, N.J. Garoppolo will face his former Patriots teammates for the first time on Sunday, Oct. 25. (AP Photo/Bill Kostroun)

That work helped Garoppolo develop from a raw prospect coming out of Eastern Illinois into an accomplished quarterback in the NFL, even if it took leaving New England to do it.

Now Garoppolo gets his first chance to go up against his former coach and team since being traded away to San Francisco nearly three years ago when the 49ers visit the Patriots on Sunday.

“It set me up for everything here, made the transition a lot easier,” Garoppolo said about the work he did with the Patriots. “Initially I could remember the first OTAs and training camp. It was rough going from college to the NFL. That’s why when you see these guys come in and start right away, it’s impressive.”

Garoppolo said he had to learn everything from how to play from under center instead of the shotgun to identifying fronts and coverages when he got to the NFL as Tom Brady’s backup after being drafted in the second round in 2014.

He said he owes much of his success to that time, appreciating everything Belichick taught him.

“He was just very honest,” Garoppolo said. “Really never beat around the bush. He’s very black and white with everything they did. That’s kind of how I am. I really appreciate that from him. Whether it was my first day there or when I got traded, he always shot me straight and I think just when you’re talking about just man to man, that’s all you could really ask for at the end of the day.”

Garoppolo never got much of a chance to play in New England with Brady entrenched as the starter. He started two games to open the 2016 season when Brady was suspended but got hurt in the second game and missed an opportunity to start the final two games.

He showed enough in those two starts to become a hot commodity on the trade market. The Patriots finally gave him up midway through the 2017 season, knowing he could become a free agent the following offseason and Brady was still playing at a high level.

“Everybody here had a lot of confidence in him,” Belichick said. “It’s one of those situations where you’re not able to keep all the players, based on the system that’s set up, which is understandable. I’m glad that it’s worked out for him and San Francisco. I hope it doesn’t work out on Sunday. But otherwise, I’m happy he has the opportunity to play for a great coach and a great organization and play on a great team. I think he deserves that. He certainly worked hard and earned it, and I’m happy for him and his family.”

Garoppolo’s addition helped spark a turnaround in San Francisco for a Niners team that lost its first nine games with Kyle Shanahan as coach. Garoppolo took over the starting role late in the 2017 season and won all five starts to finish a 6-10 season.

His ascension got derailed the following year when he went down with a season-ending knee injury in Week 3, but recovered to play well enough last season to help San Francisco win 13 games and make it to the Super Bowl.

But a poor fourth quarter in that loss to the Chiefs left questions about whether he was the long-term answer in San Francisco that only grew louder when he got pulled at halftime two weeks ago after throwing interceptions on back-to-back drives on a bum ankle in a 43-17 loss to Miami.

He bounced back last week by throwing three TD passes in the first half of a 24-16 win over the Rams.

“I think that’s one of the most impressive things about Jimmy,” Shanahan said. “When you think the pressure might get to him and stuff, which you would think it does to everybody, it is human nature and it’s a very tough position. Whether you play good or bad, if the result’s not good, you’re going to get questioned a lot and people are going to point the finger at a quarterback a lot. The tough game that our whole team had versus Miami with him getting taken out there in that game. Yeah, it was tough, but the way he came into work on Monday, you couldn’t tell. He’s very mentally strong.”

That will come in handy on Sunday when he returns to his old home to face his former team and a defensive-minded coach known for making things as tough as possible on opposing quarterbacks.

“It’s an exciting week,” he said. “Get to go back to where it all started for me in my NFL career. ... Exciting week and I can’t wait for Sunday.”