49ers vs Seahawks, with Sherman on other side of rivalry 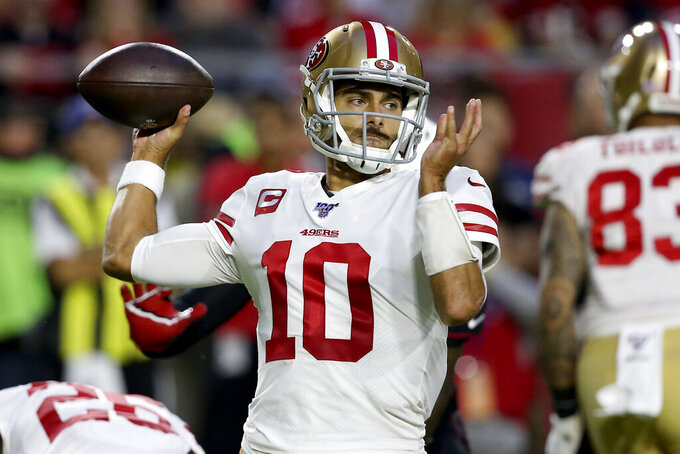 The last time the San Francisco 49ers had a winning record for a home game in November, Colin Kaepernick was their quarterback and Russell Wilson and Richard Sherman ate turkey legs at midfield to celebrate a victory for Seattle.

That won't happen Monday night when the unbeaten 49ers (8-0) host the Seahawks (7-2) in the biggest game in this rivalry since Thanksgiving 2014.

The 49ers lost to the Seahawks 19-3 that night to fall to 7-5. They finished 8-8 that year and hadn't won more than six games until this season.

Sherman is on their side now, playing a huge role for the NFL's top-ranked defense. The three-time All-Pro cornerback is part of a secondary that's No. 1 against the pass. San Francisco has allowed the fewest yards per game (241) and second-fewest points (12.1). But the Niners will be without linebacker Kwon Alexander.

Jimmy Garoppolo has played well and could have three starters joining him in the starting lineup. Bookend tackles Joe Staley and Mike McGlinchey and fullback Kyle Juszczyk are expected back from injuries, bolstering the league's second-ranked rushing attack.

They'll face a defense that has struggled. Seattle ranks 22nd in points allowed, 25th in yards allowed and 25th in sacks. Jadeveon Clowney only has two sacks, though he faces double teams quite often.

But the X-factor for the Seahawks is Wilson. He's playing at an MVP level. Wilson has 22 TD passes, only one pick and leads the league with a passer rating of 118.2.

Josh Jacobs scored on an 18-yard run with 1:02 remaining to give Oakland the lead. Derek Carr led the Raiders (5-4) down the field methodically 75 yards after Philip Rivers threw a 6-yard pass to Austin Ekeler that gave the Chargers (4-6) a 24-20 lead with 4:02 remaining.

The battle for last place in the NFC North features two teams that combined for one win in October. The Lions have lost four of five after a 2-0-1 start. Their only win in that span came against the Giants two weeks ago. The Bears have lost four in a row following a 3-1 start.

The Ravens are coming off a convincing 37-20 victory over the previously unbeaten Patriots. Their defense held Tom Brady in check and Lamar Jackson threw for a TD and ran for two more. Jackson had 153 yards rushing in Baltimore's 23-17 win over the Bengals last month.

The Bills are off to their best start in 26 years, feasting off losing teams. Their wins have come against clubs that are 9-43 combined while both losses were to teams currently with winning records.

They'll face the Browns, who have proved to be overhyped. Baker Mayfield, Odell Beckham Jr. & Co. were a fashionable pick to win the AFC North, but these are the same old Browns. They appear to have deeper issues beyond poor performance on the field.

Buffalo has the league's third-ranked defense, led by sack leader Jordan Phillips and a strong secondary, and quarterback Josh Allen already has 12 rushing TDs in his first 20 games.

Both teams are coming off a bye heading in opposite directions. Drew Brees returned after missing five games and picked up where he left off, throwing for 373 yards and three TDs against Arizona.

Not much has gone right for the Falcons, but they do have the league's top-ranked passing offense. Matt Ryan is expected to return from an ankle injury that sidelined him one game. Coach Dan Quinn's defense has struggled since he took over coordinator duties, but he made a coaching switch during the week off, shifting receivers coach Raheem Morris to the secondary. Atlanta has allowed the third-most points per game (31.3).

North Jersey bragging rights are on the line when the Giants switch locker rooms at their home stadium to be the "road" team against the Jets. Things are only slightly better for the Giants, who briefly enjoyed success after rookie Daniel Jones replaced Eli Manning. But they've lost five in a row.

The Jets are a mess under first-year coach Adam Gase, who is already on the hot seat. Sam Darnold has taken a step backward from his rookie season and two-time All-Pro Le'Veon Bell hasn't run for more than 70 yards in his first eight games with his new team.

The real loser in this game might be the team that hurts its draft positioning by winning.

Rookie quarterback Kyler Murray has helped the Cardinals look promising, though it hasn't translated into many wins. Murray hasn't thrown an interception in five games and has been a dual-threat passing and running. Kenyan Drake ran for a team-high 110 yards and caught four passes for 52 yards in his debut with the Cardinals last week, though David Johnson could return for this game.

The Buccaneers have had trouble finishing games. They took leads into the fourth quarter of three of their six losses, including a 40-34 overtime loss at Seattle last Sunday. Jameis Winston bounced back from two poor games to post his fifth performance with a passer rating in the 100s this season.

Patrick Mahomes might return under center after dislocating his kneecap Oct. 17. The Chiefs are 2-1 with Matt Moore, including the game he finished when Mahomes got hurt. Kansas City needs to stay close to the Patriots (8-1) going into their Week 14 matchup to have a chance at home-field advantage.

The Titans are 2-1 since Ryan Tannehill replaced Marcus Mariota, but they were sloppy in a loss to Carolina last week. They also lost cornerback Malcolm Butler to a wrist injury.

Tennessee will have to rely on Derrick Henry's running to keep Mahomes off the field and limit Kansas City's offense. The Chiefs have the fourth-worst run defense in the league and allowed 161.7 yards per game on the ground in their three losses.

Brian Hoyer is expected to make his first start of the season filling in for Jacoby Brissett as the Colts host the Dolphins, who are no longer winless.

Hoyer stepped in after Brissett injured his knee and tossed three TD passes, but Adam Vinatieri missed a 43-yard field goal with 1:14 left in a 26-24 loss at Pittsburgh. Now Indy will likely have to rely on the 11-year veteran for a while until Brissett returns.

Another veteran, Ryan Fitzpatrick, led the Dolphins to their first win, throwing three TD passes in a victory over the Jets. Miami will need more FitzMagic against the Colts because two of the team's best young players won't play. Running back Mark Walton was suspended for four games and receiver Preston Williams has a knee injury.

Aaron Rodgers and the Packers are coming off their worst game this season, a 26-11 rout at the Chargers. Rodgers questioned the team's preparation on a trip to California. They should be focused back at home and with a bye week upcoming.

The Panthers are Kyle Allen's team now that Cam Newton is officially out for the season. Allen is 5-1 as the starter and getting his sixth win won't be easy at Lambeau Field. He'll rely on Christian McCaffrey, who could be in for a big day against Green Bay's run defense. McCaffrey is second in the league in rushing and the Packers allow 127.7 yards rushing per game.

Jared Goff, Todd Gurley and the rest of the Rams' offense have a tough task against Pittsburgh's defense. The Steelers are second in the league with 22 takeaways and third in sacks with 29. Minkah Fitzpatrick already has four interceptions since joining the team, including a pick-6 last week.

The Rams won't have receiver Brandin Cooks, who is out with a concussion. Gurley hasn't rushed for more than 65 yards since Week 1, but Los Angeles has relied on its passing attack, ranked fifth in the league.

This will be a matchup of strengths. Dallas has the league's top-ranked offense led by Dak Prescott, Ezekiel Elliott and Amari Cooper while the Vikings have the No. 7 defense. On the flip side, Minnesota's eighth-ranked offense takes on Dallas' sixth-ranked defense.

The Cowboys are seeking their third straight victory. They had consecutive lopsided wins against division rivals. They begin a stretch of tough games, playing five of their next seven games against teams currently with winning records.

The Vikings look to bounce back after their four-game winning streak was snapped in Kansas City. Kirk Cousins has 14 TD passes and only one pick in the past seven games, and Dalvin Cook leads the NFL in rushing with 894 yards.