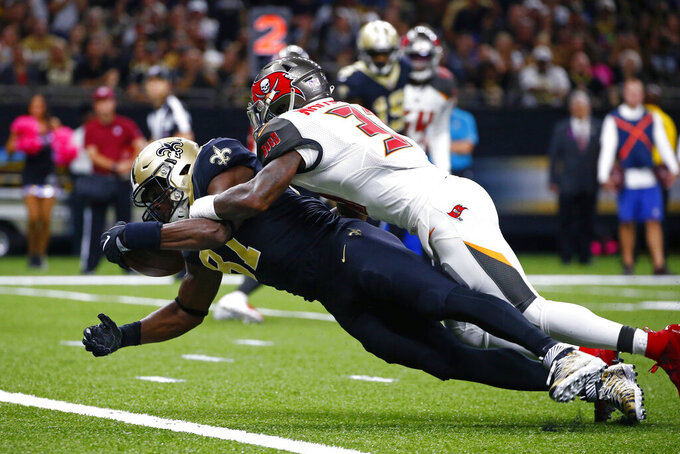 NEW ORLEANS (AP) — Tampa Bay coach Bruce Arians made no effort to hide his frustration with the Buccaneers' struggling secondary after watching it again give up more than 300 yards through the air in New Orleans.

"We're too soft and I don't know any other way to put it," Arians said. "We've got some guys that aren't getting after it and we've got guys that are just soft."

The Saints (4-1) entered having gone without a touchdown drive on 10 consecutive possessions. Tampa's opening stops made it 13 straight, but that early success was short lived.

Fill-in starter Teddy Bridgewater led the Saints to touchdowns on four of New Orleans' next five series and the Bucs (2-3) could not recover in a 31-24 loss.

After passing for fewer than 200 yards in either of his first two starts this season, Bridgewater finished with 314 yards and four touchdowns and a QB rating of 131.2 against a Tampa Bay defense that came in ranked 31st against the pass after allowing 490 yards through the air to the Los Angeles Rams in Week 4.

Cook, who was checked out on the sideline and cleared by medical staff, returned to eventually finish the drive with a 9-yard touchdown reception for a 17-10 New Orleans lead.

"It sucks to not be out there," Davis III said. "This is a huge game for us, a road game. I know that I could have impacted it."

Saints receiver Michael Thomas, meanwhile, finished with 182 yards and two touchdown receptions on 11 catches. Tampa Bay, no matter the coverage, had a hard time stopping him, including in the fourth quarter on his 12-yard tackle-breaking touchdown that gave the Saints a 31-17 lead.

Bucs cornerback Sean Murphy-Bunting said he and fellow defensive backs should have been more physical when Thomas was pushing them away to create separation while running his passing routes.

"He's going to do things like that," Murphy-Bunting said. "But you've got to be able to man up and kind of deal with it, because you're not going to get that call most of the time."

Arians also pointed to New Orleans' 8 of 15 success rate on third downs and lamented that Tampa Bay was just 3 of 11 in those situations.

Arians had criticism for the offense, too, particularly his inability to get No. 1 receiver Mike Evans a single reception. It was just the second time Evans was held without a catch. The other time also was against the Saints in 2015.

Bucs QB Jameis Winston said that every time Evans was in single coverage against top Saints cornerback Marshon Lattimore, there was "a cloud" of defenders in the vicinity who could help if the ball went to that area.

"Every time he was on the field, he was getting a cloud," Winston said. "Any time he was in the slot, they was doubling him . ... We've just got to try to find a way to get him open and we will."

A week after scoring 55 points and gaining 464 yards in a victory over the Rams, Tampa Bay managed only 252 yards in New Orleans.

Winston was sacked six times, including twice by 2018 first-round pick Marcus Davenport, and the Bucs ran for only 94 yards before a two-touchdown deficit forced Tamp Bay to abandon its ground game.

"When we couldn't run the ball in the fourth quarter, they sent the dogs after us and they were able to get pressure on Jameis," tight end Cameron Brate said. "Just a frustrating day overall."