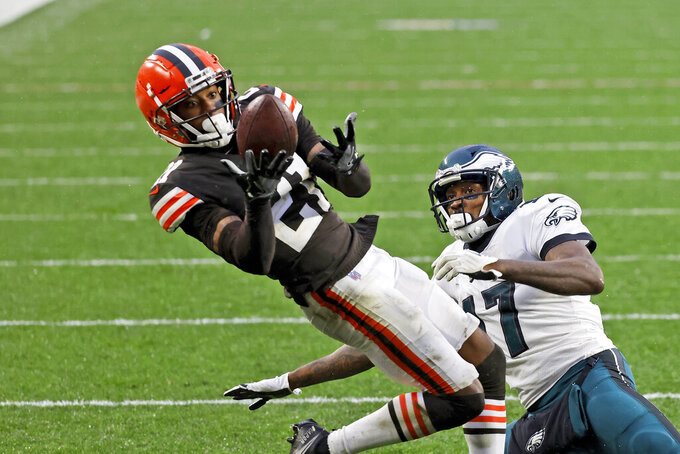 FILE - In this Sunday, Nov. 22, 2020, file photo, Cleveland Browns cornerback Denzel Ward (21) intercepts a pass intended for Philadelphia Eagles wide receiver Alshon Jeffery (17) during an NFL football game in Cleveland. The Browns may have their best cornerback in the lineup on Sunday for the first of two straight weekend trips to New York. Cornerback Denzel Ward, who playing at a Pro Bowl level when he got hurt, returned to practice Wednesday after missing three games with a strained calf. (AP Photo/Kirk Irwin, File)

CLEVELAND (AP) — Denzel Ward may be ready to go this week for the Browns, who could face one of their many former quarterbacks against the New York Giants.

Cleveland's top cornerback returned to practice Wednesday after missing three straight games with a strained calf. Ward was playing at a Pro Bowl level — leading the NFL in passes defensed — when he got hurt last month against Philadelphia.

The Browns (9-4) will monitor Ward and see how he responds in the next few days before deciding if he'll play against the Giants (5-8).

It's still up in the air who will be under center for New York. Starting quarterback Daniel Jones is dealing with two leg injuries, the newest sustained while he was being sacked six times in Sunday's loss to the Arizona Cardinals.

Giants coach Joe Judge said Wednesday that Jones, who was already dealing with a lingering hamstring injury, will be evaluated over the next few days before a decision is made for the game.

If Jones can't play, the Giants would turn to backup Colt McCoy, a Cleveland draft pick in 2010 who started 21 games for the Browns before they traded him to San Francisco in 2013. McCoy stared for an injured Jones earlier this month and led the Giants to a 17-12 upset of Seattle. He completed 13 of 22 passes for 105 yards with one touchdown and an interception.

Browns coach Kevin Stefanski said his team will be ready for both New York QBs.

“Two good players,” Stefanski said. “Daniel Jones, I know he was a little bit banged up, but you know the type of athlete he is. He can really hurt you with his arm or his legs. Really good young player.

“And Colt McCoy’s done it many times over the years, and he’s won for this Giants team. He’s a veteran, he’s seen it all. He understands what they want to do offensively, where to go with the ball. So really good quarterback, good backup quarterback.”

Ward's return is a big plus for Cleveland's secondary, which has been hurting all season. Without Ward, the Browns have been susceptible to big plays. The first-round pick in 2018 from Ohio State was credited with 15 passes defensed before his injury.

The Browns will likely be without starting safety Andrew Sendejo. He's in concussion protocol after being injured while trying to stop Ravens running back J.K. Dobbins on a 2-point conversion late in Monday night's 47-42 loss to the Baltimore Ravens.

Stefanski said Hooper is “trending in the right direction” and might be able to play this week as the Browns try to move closer to their first playoff berth in 18 years.

Starting right guard Wyatt Teller also missed practice with an ankle issue that sidelined him during the Ravens game.