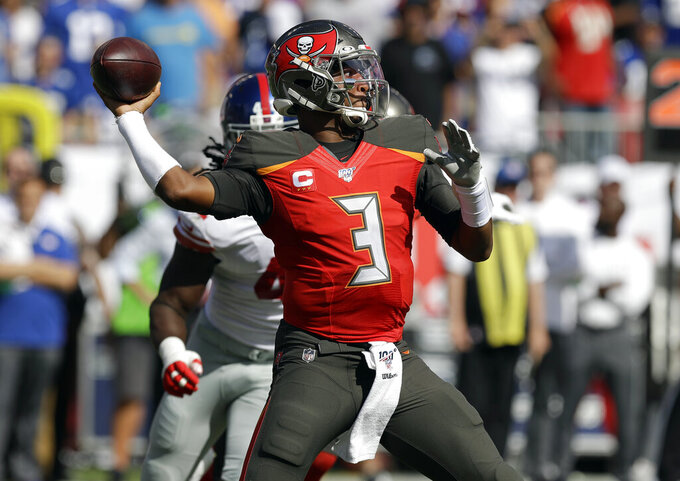 That was bound to happen after the Bucs’ offense accounted for all but one touchdown in a 55-40 victory over the Rams in Los Angeles last weekend _ in the same stadium where the Saints couldn’t muster more than three field goals in a Week 2 loss .

“Whatever they’re asking him to do, I think he’s doing it at a high level,” Saints middle linebacker Demario Davis said of Winston. “Sometimes, guys, it’s important for them to be in the right fit. So maybe that’s what it is, but they’re executing at a high level right now. Not just him, but the whole offense.

“They make a lot of explosive plays and it’s going to be another intense game for us,” Davis added.

Sunday’s showdown between the Saints (3-1) and Buccaneers (2-2) could tip the balance of power in the NFC South. New Orleans has managed to stay atop the division by winning both games that Teddy Bridgewater has started in place of record-setting QB Drew Brees. A thumb injury against the Rams is forcing Brees to sit out about six weeks .

“They're doing a great job offensively of just staying to the course and not turning it over, knowing what they have to do,” Arians said. “Feed off the defense and the defense and special teams are creating points and keeping it close and winning and that's what you have to do when your quarterback's down.”

For now, New Orleans’ offense is statistically the least productive by far that it has been since offensive-minded coach Sean Payton took over in 2006. Normally a top-10 offense _ if not top five _ the Saints rank 26th in yards per game. Last Sunday night, they won despite not scoring a touchdown, edging Dallas 12-10 .

Bridgewater says he doesn’t care about statistics if the Saints are winning, but also conceded that his statistics might have to get better for the Saints to keep winning.

“Overall, we just have to be better. It starts with me, with my tempo,” Bridgewater said. “We understand that we want to score and in order to win this game you need touchdowns.”

Here are some other things to watch when the Buccaneers travel across the Gulf Coast to a city that was once the home of notorious pirate Jean Lafitte, and where a narrow French Quarter promenade is known as “Pirate’s Alley”:

Bucs receivers Mike Evans and Chris Godwin are the most productive receiving duo in the league with a combined 754 yards through four games. That’s 20 more yards than Kansas City’s Travis Kelce and Sammy Watkins.

“They can do so many different things. They’re not always sitting in one spot,” Arians said of why Evans and Godwin seem to complement each other so well. “They’re both good blockers, so they can get through play action because they block. They’ve got great hands and they’re good receivers. That’s a hell of a combination.”

Payton has promised to address his team’s penalty epidemic. The Saints have been penalized 38 times _ an average of 9.5 per game _ for 285 yards. The coach sounds most annoyed by the 11 offensive holding calls against his team.

“Look, we're in the NFL here. In other words, we need to be able to get off on the snap count and execute without putting ourselves back in three out of our 12 drives a game,” Payton said. “It's been crazy. It's been ridiculous, honestly.”

Running the ball could be a struggle for both teams.

The Buccaneers, whose defensive front has been led by defensive tackle Ndamukong Suh, middle linebacker Lavonte David and outside linebacker Shaquil Barrett, have been the NFL’s best run stuffers through the first quarter of the season, allowing just 59.3 yards rushing per game.

“They're going to make it challenging at the line of scrimmage for your quarterback to just go up and call any run,” Payton said. “It's a heavy front and it's a pressure front."

The Saints rank 20th against the run, but have begun to look more like the team that allowed the second-fewest yards rushing all of last season. Defensive tackle Sheldon Rankins returned last Sunday against Dallas from an Achilles tendon tear that had sidelined him since January. New Orleans allowed just 45 yards on the ground to a Cowboys team than had come in averaging 179.

Since throwing three interceptions and having two of them returned for touchdowns in a season-opening loss to San Francisco, Winston has strung together three strong performances, including last week’s 385-yard, four-TD outing against the Rams. Even though the fifth-year pro had another interception run back for a TD that trimmed Tampa Bay’s lead to five points in the fourth quarter, Arians asserted that Winston is playing as well as any quarterback over the past three weeks. He’s fifth in the league in yards passing (1,167) and tied for fourth in TD passes with nine _ one behind Patrick Mahomes, Lamar Jackson and Jacoby Brissett.

“It’s just a natural growth process,” said Arians, who’s in his first year working with 2015’s top overall draft pick. “He might be ahead of the curve for where I thought maybe he would be. He’s just playing really, really well right now.”

After signing a one-year, $4 million contract with the Bucs in free agency, Barrett has far exceeded expectations, leading the NFL in sacks with nine. That ties Mark Gastineau (1984), Hall of Famer Kevin Greene (1998) and Kabeer Gbaja-Biamila (2001) for the most through the first four games of a season since 1982, when individual sacks became an official statistic. If Barrett, who had an interception last week and has also forced three fumbles, adds a sack against the Saints he will join Greene as the only players with 10 through five games.