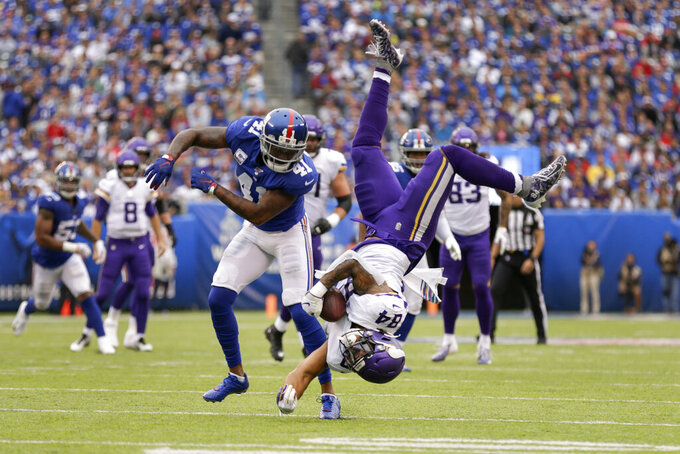 EAST RUTHERFORD, N.J. (AP) — Daniel Jones and the New York Giants' run of success got a reality check from the Minnesota Vikings.

After breathing life back into the Giants' season by engineering wins over the Tampa Bay Buccaneers and Washington Redskins, Jones and the Giants (2-3) took their lumps in a 28-10 loss to the Vikings on Sunday.

Jones was limited to 182 yards passing and threw an interception in his first loss since replacing Eli Manning as the starter three weeks ago. The offense that had averaged 28 points in the victories missed its chances. The offensive line allowed Jones to be sacked four times and hit eight other times.

The biggest disappointment was the defense. A week after limiting Washington to 176 total yards, it gave up 490 yards to Minnesota.

The bottom line is the Giants didn't play well enough and they now head to New England for a game against the Super Bowl champion Patriots (5-0) on Thursday night.

The Giants had their chances against the Vikings. Jones missed a wide-open Sterling Shepard on a deep route on the Giants' opening series, and he was too high on a third-quarter throw to Shepard in the back of the end zone with New York trailing 18-7. It settled for a field goal.

"They are a good defense and they deserve credit," Jones said. "Like I said, I think we created enough opportunities for ourselves to win. Maybe there wasn't as much space at times, but I think that's going to happen any game, and as long as you are creating opportunities, you need to be able to convert those. We didn't do that, I didn't do that, that's why we lost."

Shepard said everyone on the offense needed to step up.

"I mean, that was a great defense that we just faced," he said. "But we look at ourselves as a great offense. Like I said, it's a game of inches. You have to be sound in everything that you do. We have to get in the film room and figure out what we need to correct before this quick turnaround."

Vikings defensive end Everson Griffen was impressed with Jones (31 of 38) and his courage under pressure.

"He's a good player, so I see good things happening for him in the future," said Griffen, who had a sack and a hurry.

The Giants' 211 yards made for their lowest total since gaining 170 yards in a 20-10 loss at Washington on Nov. 23, 2017. Their 64 yards rushing were their fewest since they ran for 47 in the loss to the Titans last season. The Giants finished with 147 net passing yards, their lowest total since they threw for 121 yards in a victory against Washington on Dec. 31, 2017.