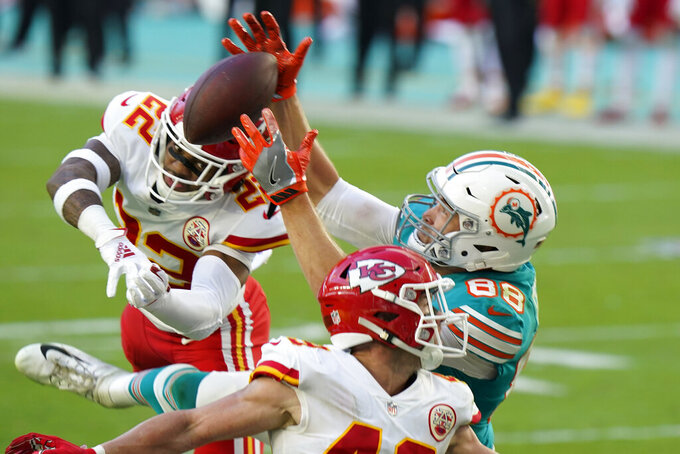 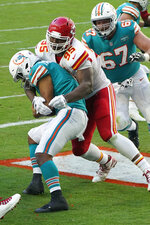 MIAMI (AP) — The Miami Dolphins’ playoff odds and injury report are both longer this week in the wake of a bruising loss to the Kansas City Chiefs.

Miami (8-5) fell two games behind AFC East leader Buffalo, making it unlikely the Dolphins will end their streak of 12 years without a division title. Six AFC teams have more wins, and the Dolphins are given a 33% chance by FiveThirtyEight to earn a wild-card berth.

They'll likely need to win two of their final three games to end their four-year playoff drought. The closing stretch starts Sunday at home against the New England Patriots, who beat Miami in the season opener.

The Dolphins could be severely short-handed in the rematch. By the end of Sunday's 33-27 loss to Kansas City, the Dolphins were without their top four pass catchers and two starting linebackers.

“We need the next guy to step up and step in,” coach Brian Flores said Monday. “It has been that way for every team the entire year. The teams that are able to adjust the best give themselves an opportunity to continue to play well. And it’s a great opportunity for the guys that get to step in.”

The Dolphins' ball-hawking defense is tied for the NFL lead with 25 takeaways, including four against the Chiefs. NFL interception leader Xavien Howard's had one of three picks against Patrick Mahomes, who had thrown only two previously all season.

Cornerback Byron Jones forced a fumble that Miami recovered, and also grabbed his first interception since 2017. The Dolphins' streak of at least one takeaway in 19 consecutive games is the league's longest.

Howard, a contender for Defensive Player of the Year, has an interception in five consecutive games. His nine interceptions are the most in a single season in the NFL since Chicago’s Tim Jennings in 2012.

“I feel great about it, man," Howard said. “I’ll just keep getting the ball for the offense and putting the ball in their hands and making plays.”

The Dolphins will be in the market during the offseason to upgrade at receiver and running back, and depth in both areas has been severely tested.

It's possible just one receiver will reach the 500-yard mark. Only one player — Myles Gaskin — has rushed for more than 166 yards, and he's on the COVID-19 list.

Working with reserves at several skill positions, rookie Tua Tagovailoa still threw for a season-high 316 yards and again looked good running the no-huddle offense in the fourth quarter as Miami tried to rally from a 30-10 deficit.

“We ran out of time,” Tagovailoa said.

Lynn Bowden led Miami with seven catches for 82 yards, both season highs for the rookie. He was drafted in the third round by the Las Vegas Raiders and traded to Miami in September. He played some quarterback at Kentucky.

The Dolphins' special teams have been excellent this season, and had perhaps their worst game against the Chiefs. Jason Sanders was wide with a 45-yard field goal attempt, only his second miss this year, and a wall of Kansas City blockers helped Mecole Hardman score untouched on a 67-yard punt return.

“It's too early to tell,” Flores said. “We're still going through the evaluation process with our medical staff.”

1 — Tagovailoa's first career interception came in his sixth NFL start. The last team to pick him off was Louisiana State, and his combined touchdown/interception ratio for college and the pros is now 96-12, including 9-1 this year.

This week the Dolphins hope to avenge a 21-11 loss at New England in Week 1. They then finish with road games at the Raiders and Bills.