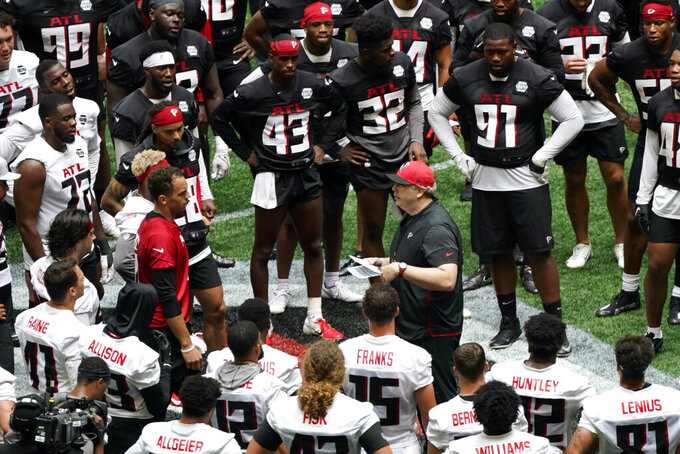 ATLANTA (AP) — Kyle Pitts says the Atlanta Falcons' new FieldTurf playing surface at Mercedes-Benz Stadium, which has become a safety concern when used for soccer, is different but good.

“Yeah, I like it,” Pitts, the second-year tight end, said Friday after organized team activities practice in front of fans. “It’s soft. It’s different. I like the turf.”

The workout was the Falcons' first chance to test the new FieldTurf surface, which was replaced in February. There were no incidents in the practice.

Pitts' teammates who were asked about the turf shared his positive review.

“It’s a little different,” said linebacker Mykal Walker, entering his third season with the Falcons. “I kind of like it. Soft.”

The Major League Soccer Players Association has expressed concerns about the safety of the turf, even though the FieldTurf surface is the same product and brand that has been used since the stadium opened in 2017.

Bob Foose, the MLSPA’s executive director, said Tuesday the players association is “gravely concerned about the number of serious injuries that have occurred on the new playing surface at Mercedes-Benz.”

The Falcons also use FieldTurf when weather forces them to move to their indoor practice facility in Flowery Branch.

Falcons wide receiver Frank Darby just shrugged when asked if the new artificial turf felt different than the field in their practice facility or at Mercedes-Benz Stadium last season.

“No, I look at it as turf is turf,” Darby said. “You’ve got the perfect cleats, you’re going to stop and go, anywhere you go.”

According to information provided by Mercedes-Benz Stadium, the surface was tested by a third-party inspector for FIFA in February and was certified “FIFA Quality Pro,” the highest certification given to a synthetic surface.

Despite the certification, natural grass is the preferred playing surface for soccer. If Mercedes-Benz Stadium is selected as one of the hosts for the 2026 World Cup, a natural-grass surface would be installed for that competition.

FieldTurf is used by 11 NFL teams. The Falcons, Giants, Jets, Lions, Panthers, Patriots and Seahawks play and practice on the surface. The Buccaneers, Eagles, Packers and Steelers use the surface for practice.

“It felt great actually,” said veteran running back Damien Williams when asked about the field. Williams, who played with the Chicago Bears in 2021 and previously played with the Chiefs and Dolphins, said “I haven’t played on turf for a long time as far as being home, but it feels good.”

When asked if the surface felt soft, Williams said "For sure. You get a little bounce on it. ... I’m ready to tear it up.”