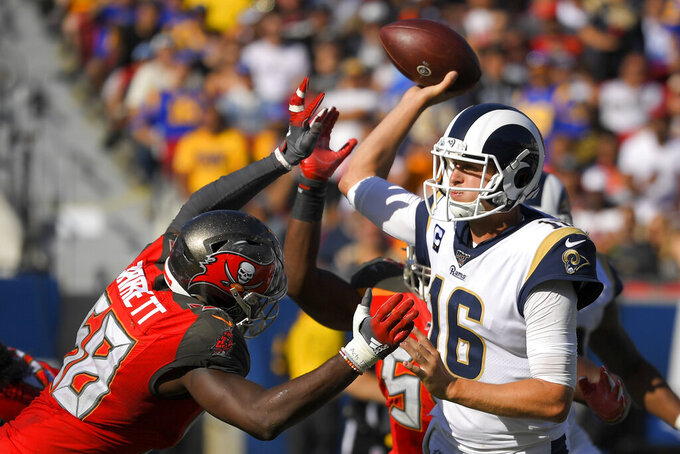 THOUSAND OAKS, Calif. (AP) — Jared Goff made NFL history when he completed 45 passes against Tampa Bay. No quarterback in the league's 100 years ever had more completions in a single game.

This noteworthy achievement did not prompt a celebration at the Los Angeles Rams' training complex Monday.

That's because it underlined two problems for a 3-1 team: The Rams couldn't or wouldn't run the ball with Todd Gurley again, and they had to spend all Sunday playing from behind in their 55-40 loss to the Buccaneers.

The defending NFC champions know they've got offensive flaws to fix, and Goff's career-best 517-yard day was a symptom of them. Goff's 45 completions tied Drew Bledsoe's single-game NFL record from 1994, while his 68 pass attempts were the third-most behind Bledsoe's 70, six of which came in an overtime win by New England.

"I know that's not a world we want to live in," Goff said Monday. "It's not built for success that way. Unfortunately, we were down early and had to use that as our game plan, and I don't think that's something we want to live by."

The Rams have only three days to prepare for their trip to Seattle (3-1) for their first division game of the season Thursday. A loss would put them into third place in the NFC West after the Rams never spent a day out of first place in coach Sean McVay's first two seasons.

McVay blamed the Rams' 28 yards rushing — including 16 on five carries for Gurley, the most productive running back in the NFL over the past four seasons — on several early penalties leading to a 21-0 deficit. After falling so far behind, McVay felt he had to throw incessantly.

"We never really got back into our normal down-and-distance operation, where we could be underneath the center and have some run-pass balance," McVay said. "I think that puts a lot of stress on the quarterback, on the offensive line."

That doesn't explain the Rams' season-long ineffectiveness with the zone running attack that was so good during McVay's first two seasons, and which the Rams count on to set up their play-action proficiency. McVay insists he is determined to get Los Angeles back in the rushing business, but it won't be any easier in Seattle.

The Rams have dropped from the ranks of the NFL's unbeaten five games earlier than they did last season, which ended with a trip to the Super Bowl. The Rams still believe they have superior talent, so they feel their biggest obstacles are themselves.

"We're so used to winning," defensive lineman Michael Brockers said. "Everybody expects to win, so coming from a game like that, you always take a piece of that little humble pie, you know? You've got to sit down, kind of gather yourself and say, 'OK.'"

Although Jameis Winston passed for 385 yards and four touchdowns while facing very little pass rush, the Rams' secondary wasn't embarrassed as much as the numbers suggest. Marcus Peters added a pick-six in the fourth quarter to a solid coverage game, while safeties Eric Weddle and John Johnson combined for a whopping 26 tackles.

The Rams have committed seven turnovers in the last two games, including four against the Buccaneers. Goff has fumbled in 11 of his last 12 games — all except the Super Bowl — and though he recovered some of those fumbles, he knows ball security is an issue.

"It's really happened when I've been throwing," said Goff, whose late fumble against Tampa Bay was returned by Suh for the clinching TD. "It's something that I'm conscious of, but I have to throw."

Cooper Kupp leads the NFC with 388 yards receiving after his third straight 100-yard performance. Kupp has returned from injury with a phenomenal first quarter of the new year. He's not alone, either: Robert Woods has 307 yards receiving, and Brandin Cooks has 296.

Aaron Donald has a modest 10 tackles and one sack through four games, but it's not entirely the two-time AP Defensive Player of the Year's fault: He is being double-teamed more than any player in the NFL. The Rams didn't sign a proportional replacement for Ndamukong Suh on the defensive line, and Donald has yet to find his way through the morass of blockers applied to him constantly in Suh's absence.

Peters initially wasn't on the Rams' injury report despite the brutal hit put on him by Tampa Bay lineman Donovan Smith during his TD interception return . Peters was added to the report later Monday with a facial injury, but McVay said he passed the concussion tests and appears to be on track to play at Seattle.

Pete Carroll has lost three straight to McVay, and the Rams have won in three of their last four trips to Seattle. The Seahawks are amply motivated for a statement-making win in the NFC West race. Los Angeles has almost always responded to such challenges under McVay, but it's tough to predict how this year's team will handle it.