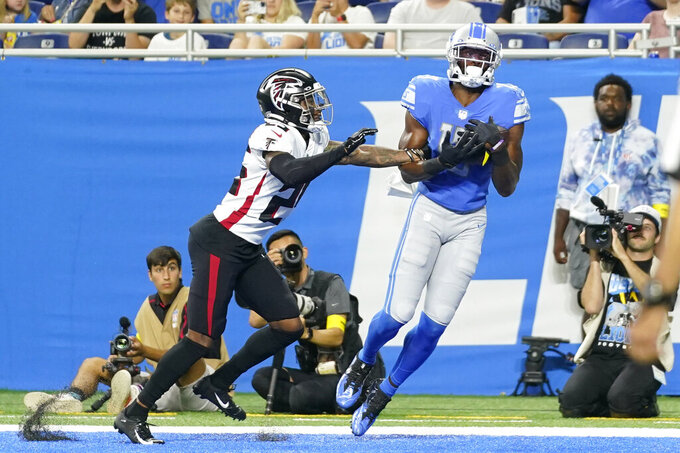 ALLEN PARK, Mich. (AP) — Devin Funchess, hoping to play in the NFL for the first time since 2019, made the most of his opportunities in the Detroit Lions’ preseason opener.

The former Michigan star had 21 touchdown receptions for the Carolina Panthers over the first four years of his career before it was slowed by injuries and the COVID-19 pandemic.

On Friday night against the Atlanta Falcons, Funchess played in just 21 snaps on offense, but he capitalized on the playing time by catching four passes for 19 yards and a touchdown. He converted a key third-and-8 by breaking a tackle on his way to a 9-yard gain. Two plays later, he had a highlight-reel hurdle of Atlanta Falcons defensive back Tre Webb on his way to another first down.

“It was just in the moment,” Funchess said of the hurdle. “I felt like they was just shooting at my knees, so it was just like, I’m not about to get hit in the knees again.”

Funchess doesn’t just have to shake off the rust from not playing in an NFL game since the 2019 season, but he’s also undergoing a position change from wide receiver to tight end. The previous time he played tight end was in his early college days with the Wolverines back in 2013.

“He’s getting more comfortable every day,” Lions tight end coach Tanner Engstrand said. “It’s good to see him have a little bit of production, because really as you mentioned, he hadn’t had a lot of targets and maybe production in camp thus far as he’s getting accustomed to feeling it out in the box instead of spread out wide.

Funchess’ value as a receiver is well known. In 2017, he caught 63 passes for 840 yards and eight touchdowns with the Panthers. But a key part in the transition to tight end is making blocking a new emphasis in his game.

Although he has only been practicing with the team for a couple of weeks now, his position coach has come away impressed with the mindset that Funchess is taking as a blocker.

“The first thing we’re going to say is ‘is he willing to do it?’ And yes, absolutely he’s willing to do it,” Engstrand said. “And he’s working on it everyday that we’re out there. He’s coming along for those things. It’s not for the faint of heart to be in there, and he does not shy away from contact whatsoever.”

That growth, Funchess says, is the result of a supportive tight end room.

“I’m just enjoying the process,” Funchess said. “Everybody in my tight end room they got me prepared for everything as far as the run calls, the blocking, and everything, so I’m just grateful for the room that I’m in.”

Funchess appears to have survived the first round of roster cuts. On Monday, the Lions cut tight ends Garrett Griffin and Nolan Givan. Still, he’ll have to compete against Brock Wright, Shane Zylstra, Derrick Deese and fifth-round rookie James Mitchell for a reserve role behind starter T.J. Hockenson.

“It’s competition, but they love me and they just teach me everything,” Funchess said. “I’m so appreciative about that.”

NOTES: In addition to Griffin and Givan, the Lions also waived C Ryan McCollum on Monday, trimming their roster to 87 before Tuesday’s 85-player roster deadline. ... On Wednesday, the Lions will kick off a pair of joint practices against the Indianapolis Colts. “It feels like you’re getting two games in a week, two games in two days,” Lions coach Dan Campbell said. “You won’t have all those reps, but yet we’re going to get over 30 reps with our starters against very good competition.”