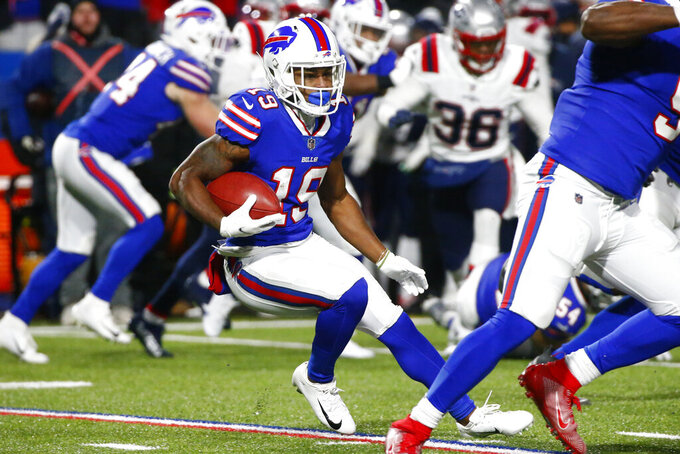 FILE - Buffalo Bills wide receiver Isaiah McKenzie (19) carries the ball during the second half of an NFL wild-card playoff football game against the New England Patriots in Orchard Park, N.Y., Saturday, Jan. 15, 2022. GeoComply Solutions, the Vancouver, Canada-based tech company, recorded 17.9 million transactions last weekend in New York, up from 17.2 million the weekend before, when it went live in the state. The data records the amount of times the company was called on to verify a customer’s location and is considered a good indicator for at least a minimum level of sports betting activity, more than 80% of which is done online in the U.S. (AP Photo/ Jeffrey T. Barnes)

ATLANTIC CITY, N.J. (AP) — New York sportsbooks took more than $600 million worth of bets from phones or computers in the first two weeks of the activity being legal this month, according to figures posted Friday.

The numbers posted by the New York State Gaming Commission show that the four currently operating mobile sportsbooks — FanDuel, DraftKings, Caesars and Rush Street Interactive — handled more than $603 million worth of bets for the weeks ending Jan. 9 and 16th.

An additional $8.5 million worth of bets were made at in-person sportsbooks in New York state over that same time period, bringing the total to $611.5 million.

Projected over a full month, that would exceed $1.2 billion and would rival the best months New Jersey's nation-leading sports betting market has ever had.

The New York sportsbooks reported $48.2 million in sports betting revenue — but the revenue of mobile sports operators in the Empire State is taxed at 51%, compared with 13% in New Jersey.

“We always knew New York had this kind of potential, just by how many New Yorkers had been going over to New Jersey to bet,” said New York state Sen. Joseph Addabbo Jr. "What's really amazing is we did this with only four sports books operating, with more to come online soon.

“There is no doubt that New York will eclipse New Jersey as the number one sports betting market in the nation,” he said.

New Jersey set the national monthly record for the largest amount of bets made (known as “handle”) in October when its casinos and sportsbooks took $1.3 billion in bets. They took over $1.2 billion in November and December as well.

But with the NFL playoffs, NBA and NHL under way — and additional sportsbooks yet to begin operating — New York appears certain to break that record, and soon.

The presence of the Buffalo Bills in the NFL playoffs is also helping drive interest among new bettors in the state. The Bills play the Kansas City Chiefs in a divisional round game Sunday.