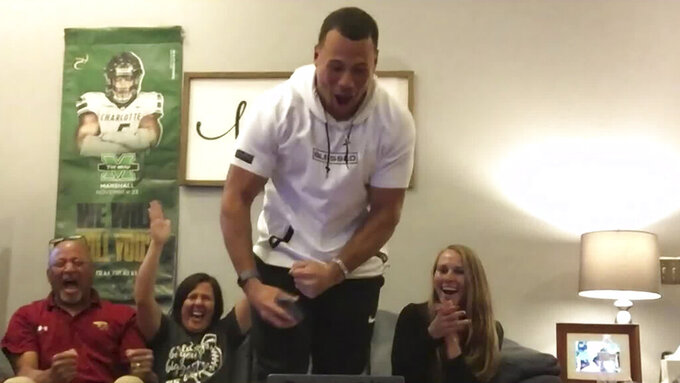 In this still image from video provided by the NFL, Alex Highsmith, center, reacts after being selected by the Pittsburgh Steelers during the third round of the NFL football draft, Friday, April 24, 2020. (NFL via AP)

PITTSBURGH (AP) — The Pittsburgh Steelers love to pick younger players. A little more raw material. A little less tread on the tires. In this year's draft, not so much.

While general manager Kevin Colbert stressed it was coincidental that the Steelers used five of their six picks on seniors, if there ever was a spring to tilt toward prospects with an extra year of seasoning, this might be it.

Neither Colbert nor head coach Mike Tomlin — or the rest of the NFL for that matter — knows how things will shake out over the next few months, with the U.S. among the hardest-hit countries in the global coronavirus pandemic. Adjusting from college to the pros can be difficult during a normal offseason. And there is nothing normal about this one.

Still, Colbert insisted the decision to take wide receiver Chase Claypool, linebacker Alex Highsmith, offensive lineman Kevin Dotson, safety Antoine Brooks and defensive tackle Carlos Davis — all of whom are on pace to graduate by the end of the summer — was based on their potential, not necessarily their experience.

“It’s just the way it broke for us this year,” Colbert said Saturday. “We're very comfortable with that. We always try to catch them younger because they’re a little fresher. The senior usually comes in at a different maturity level because he finished school or he’s close to finishing school. ... We had no plan to do that.”

Maybe, but it could have its ancillary benefits as the Steelers prepare for the NFL's first-ever “virtual” offseason. The team has no clue when it will have a chance to bring its draft picks, rookie free agents and other first-year players in for a closer look. It's not something Colbert or Tomlin feel will become an issue with the group Pittsburgh has added to a team that has missed the playoffs the past two seasons.

Claypool, selected 49th overall out of Notre Dame, provides Ben Roethlisberger the kind of big red-zone target at wide receiver the team has lacked since Martavis Bryant's rocky tenure ended after the 2017 season. He comes with size (6-foot-4 and 238 pounds), speed (a 4.42 time in the 40-yard dash) and a tenacity born from having to prove to his Fighting Irish teammates that kids from Canada can play.

“Not a lot of guys give that respect right off the bat as you can imagine,” said Claypool, who is from Abbotsford, British Columbia. “So, the respect was kind of earned for me, and that was through tough, physical play and just being competitive.”

Claypool isn't the only draft pick who attracted the Steelers because of his willingness to mix it up.

“Physicality is a brand of ball that we want to play regardless of position," Tomlin said. "We believe it’s an asset to victory for us.”

Highsmith morphed from walk-on to havoc-wreaking defensive end at Charlotte. Running back Anthony McFarland Jr. — the lone underclassman — played most of his redshirt sophomore season at Maryland on a sprained ankle that limited his effectiveness. Dotson, who played guard at Louisiana, is so confident he would tell opponents the play call in an attempt to demoralize them.

Brooks was a two-way starter growing up in Maryland before a compound leg fracture and a broken wrist — suffered on the same play in high school — led him to contemplate stepping away from the game. He opted to go forward strictly as a safety and at 5-11 and 220 pounds will give defensive coordinator Keith Butler plenty of options.

Davis, who played alongside twin brother Khalil at Nebraska, opened Tomlin's eyes by running a 4.79 40 at 313 pounds. The Steelers need somebody who can plug the middle at nose tackle after Javon Hargrave left in free agency, though Davis figures to be a bit of a project.

Then again, Davis and the rest of Pittsburgh's incoming class could have a lot of time on their hands.

Dotson is fine if he has to wait a little while longer to get to Pittsburgh. At least it means he can put one of his old jobs — as a bouncer — in the rearview mirror.

Asked if anyone ever actually challenged him when he asked them to leave, Dotson laughed.

“I did a lot of preemptive type things,” he said. “Just walking around the club, got to keep that mean look on your face just to keep people from doing stuff. I did everything so I didn’t have to. I did a few times, but if you do it enough, people know not to do anything.”