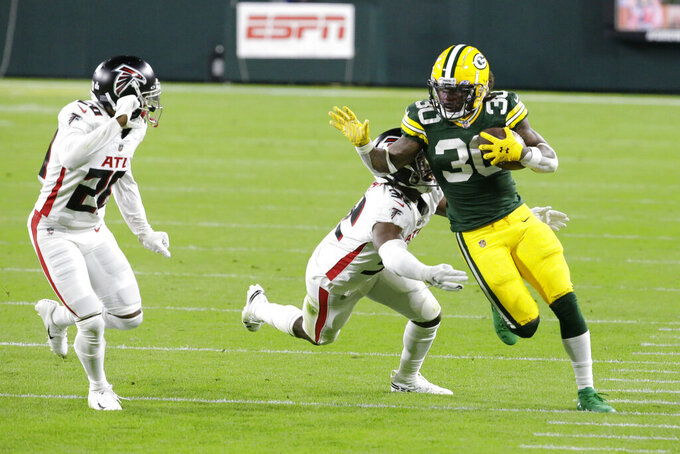 The Packers haven’t been as healthy so far this year. They haven’t needed to be as lucky.

Green Bay (4-0) heads into its bye week as one of the NFL’s six remaining unbeaten teams after defeating the Atlanta Falcons 30-16 on Monday night. A team that relied on an uncanny knack for winning close games last year now is beating teams much more handily as it seeks to take the next step.

The Packers talked at the start of the season about how they felt as if they were flying under the radar as other teams garnered more attention.

The Packers have responded by applying more of a knockout punch this year. Green Bay came from behind in the second half to win 37-30 at New Orleans, but its other three victories have been decided by an average margin of 14.7 points.

The Packers are doing this at less than full strength.

None of it has mattered so far.

“We’re off to a really strong start,” cornerback Jaire Alexander said. “We just have to continue it. We’ve done a lot of close things. We also have things we need to work on. But it’s a promising start, and we’re just going to continue on this path of ascension.”

Green Bay’s offense has scored at least 30 points and hasn’t committed any turnovers in each of its first four games this year. The only team with a longer streak of games with 30-plus points and no turnovers since the NFL started tracking turnovers in 1933 is the 2010 New England Patriots with seven, according to the Elias Sports Bureau.

It’s quibbling, but the Packers could do a better job of forcing turnovers. The Packers have three takeaways all season and didn’t have any against Atlanta. And missed tackles remain an issue.

Aaron Rodgers has thrown 13 touchdown passes without an interception. The only other players to throw 13 touchdown passes without an interception through the first four games of a season were Peyton Manning in 2013 and Patrick Mahomes in 2018. Alexander helped prevent Atlanta’s Calvin Ridley from catching a single pass Monday. Za’Darius Smith had three sacks to improve his season total to five, matching Cleveland’s Myles Garrett for the NFL lead. Robert Tonyan’s three touchdown catches gave him five for the season, putting him in a tie for first place with Tampa Bay’s Mike Evans. Williams had eight catches for 95 yards to set career highs in both categories.

Green Bay’s schedule doesn’t look nearly as strong as it appeared before the season. The four teams the Packers have beaten — Minnesota, Detroit, New Orleans and Atlanta — have a combined record of 4-12.

Rookie tight end Josiah Deguara was shaken up late in the game, and Packers coach Matt LaFleur said Tuesday the third-round pick’s injury “looks to be a pretty bad one.” Nickel back Chandon Sullivan left in the first half with a concussion. Cornerback Kevin King injured his quadriceps. Joining Adams, Clark, Lazard and Kirksey as inactive players for this game was outside linebacker Rashan Gary (ankle).

The Packers hope to spend the bye week getting healthy before visiting Tom Brady and the Tampa Bay Buccaneers on Oct. 18.