The perfect tweet: Bird is the word at Washington's camp 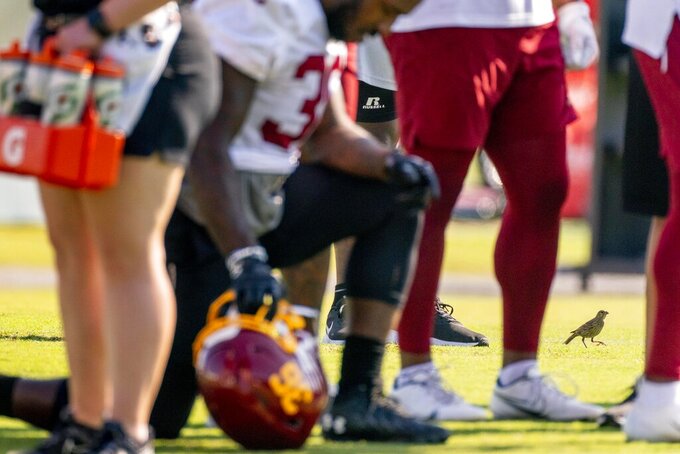 ASHBURN, Va. (AP) — It was a race to the end zone between Washington's offense and a small bird walking on the sideline.

The offense reached the goal line first, but the bird is the star of training camp this week.

Players have noticed the bird waltzing on the field and roaming the sideline each and every camp session since the team returned to its regular practice facility following a few ramp-up days in Richmond. They've interacted with the bird as if it were a 91st player on the roster, from receiver Adam Humphries crouching over to get closer to running back Antonio Gibson walking up to the bird with football in hand.

The bird isn't even scared of Chase Young when the 2020 AP Defensive Rookie of the Year got down to the bird's level.

Washington’s social media team got in on the fun by tweeting the team had agreed to terms with “Ted” the bird on a lifetime contract.

“I see he got a contract,” receiver DeAndre Carter said. “He probably got a little more than me. I’m going to ask him for a couple dollars.”

The photogenic bird has fluttered but not flown around the practice fields, instead choosing to walk everywhere.

“He hangs out,” Smith-Williams. “Team mascot. There you go: There’s the new team name.”

After being last in the NFL in vaccinations not long ago, Washington has now passed the 85% threshold of players receiving at least one dose of a COVID-19 vaccine, according to a person with knowledge of the situation. The person spoke to The Associated Press on condition of anonymity because the league is not releasing team-by-team vaccination statistics.

Coach Ron Rivera likes the fact his team is “trending up" in that category. All-Pro guard Brandon Scherff and starting defensive tackle Daron Payne returned to practice Thursday after being cleared from virus protocol.

“Kudos to the players for trying to get as informed and educated on it as much as possible,” Rivera said. “That’s a good thing. That’s a plus. We’re heading in the right direction. We still have several guys that aren’t and we’ll see what happens, but hopefully we can continue as these guys get more and more comfortable with it.”

More than a year since ditching its old name and since revealing the next moniker will not include any Native American connotation or imagery, Washington is joining the Kansas City Chiefs, NHL's Chicago Blackhawks and others to ban “Native American inspired ceremonial headdresses or face paint” for fans at home games.