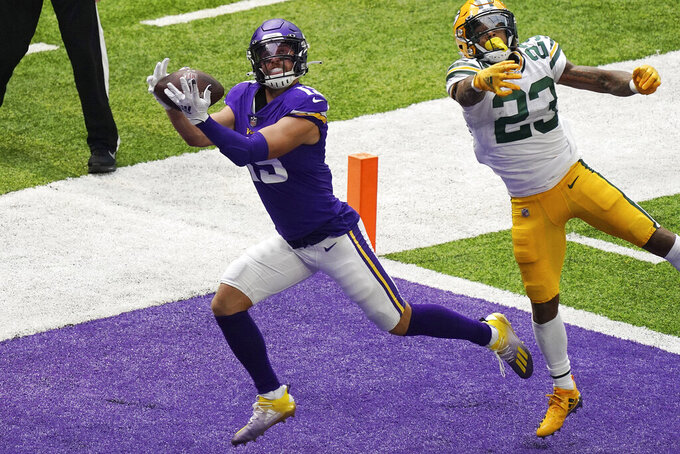 INDIANAPOLIS (AP) — Xavier Rhodes and Adam Thielen came to training camp together as rookies in 2013, one of them the Vikings' first-round draft pick from Florida State, the other an undrafted rookie from Minnesota State.

Over the next seven years, the cornerback and the receiver followed similar scripts.

They fought to win roster spots and survived a coaching change. They traded jabs in practice and challenged one another to improve. They graduated from being part-time starters to full-time starters and eventually celebrated Pro Bowl experiences together, too.

Then in March, the Vikings let Rhodes leave in free agency, splitting up the longtime friends. On Sunday, at Lucas Oil Stadium, they'll be reunited when Minnesota visits Indianapolis.

“He's probably been a big part of who I am today because he’s challenged me, he’s pushed me, he’s made things very difficult on me," Thielen said. “That’s what helps you become a better football player. When you have a challenge like that, you’re constantly having to perform your best and having to get better, so I give him a lot of credit for helping me become the player I am."

Rhodes understands the sentiment and feels the same way about many of those who will be standing on the opposite sideline Sunday.

He'll see Vikings coach Mike Zimmer, who taught the three-time Pro Bowler how to use his hands properly. Rhodes will see safety Harrison Smith, who was kind enough to take him under his wing eight seasons ago. He'll also see the two young, starting cornerbacks he mentored — Mike Hughes, the Vikings' first-round pick in 2018, and Holton Hill, who made the team that season as an undrafted rookie.

Even though the COVID-19 pandemic restrictions shorten the conversations, limit the contact and create an unusual environment with attendance limited to 2,500 fans, Rhodes is embracing the opportunity to catch up with old pals and former coaches.

“It was a brotherhood when I was there, and it’s still a brotherhood to this day," Rhodes said, pointing out he holds no grudge against the Vikings. “When I was practicing against those guys, we were competing each and every play so it’s going to be the same there on the field. But I’m going to be able to tackle them this time.”

The Vikings still hold Rhodes in high regard, too.

“I love Xavier. He’s a great kid, a good competitor,” Zimmer said. “We had a lot of good times together. We worked really close for a number of years, I guess it was. I hope he has a good year and is staying safe and healthy.”

The pleasantries don't mean Minnesota won't take some shots at Rhodes on Sunday, though.

Despite making last year's Pro Bowl as an alternate, by most accounts Rhodes had a subpar season. And while Colts coaches generally praised Rhodes' play last weekend, they also acknowledged he'd like a do-over on two plays — the touchdown he gave up and a critical pass interference call.

Yes, Rhodes understands it's not personal.

Besides he has a job to do too, and it may include providing some key intelligence to his new teammates and coaches about tendencies, personnel and preferences about his old team — one the Colts only see every four years.

And if Rhodes and Thielen get another chance to go head-to-head, well, it promises to be every bit as competitive as it was in practice all those years — and a matchup worth watching.

“He knows me just like I know him, so it definitely creates another challenge because he knows what I like to do, how I like to run routes, how I do certain things, and vice versa," Thielen said. “So it creates a challenge, that’s for sure. But that’s just how this league works. You figure it out on the fly, and you go against who you got to go against.”