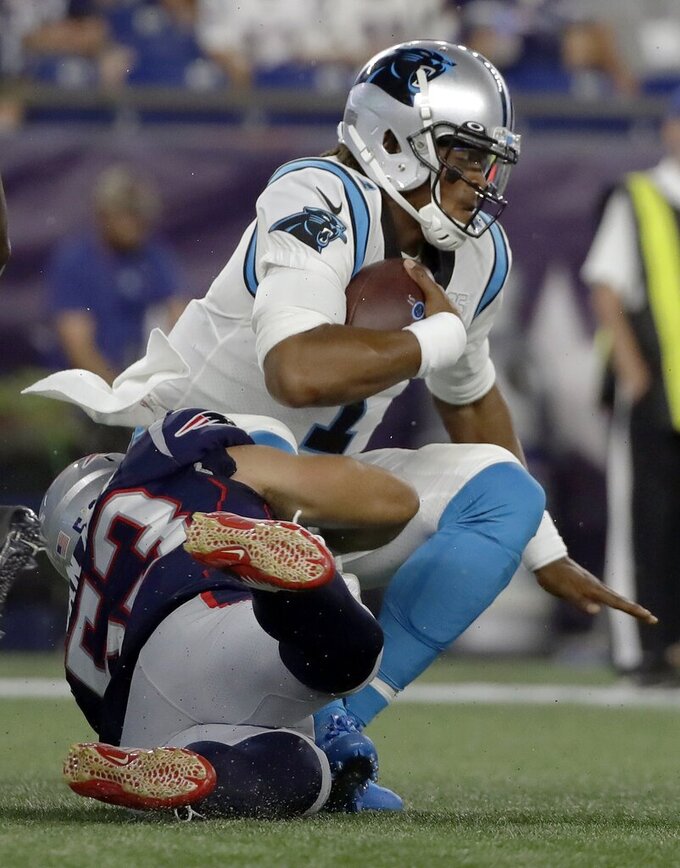 CHARLOTTE, N.C. (AP) — The Panthers offense has been downright terrible in the preseason.

But Carolina coach Ron Rivera downplayed his team's lack of production, and doesn't seem worried about the doldrums carrying over to the regular season.

"First of all, you have to take into account who is playing — that's probably the biggest thing," Rivera said Monday. "If we went off of that, I think maybe we can all calm down, take a breath and see what happens."

Rivera has taken an ultraconservative approach to the preseason this year — much more so than in the years past — resting his starters to limit the risk of injury.

Cam Newton, running back Christian McCaffrey and tight end Greg Olsen were held out of the first two preseason games. They only played three possessions (or 11 plays) in a 10-3 loss to the Patriots last week with Newton leaving with a mid-foot sprain.

"To me it's always about playing the games that count," Rivera said.

While Rivera doesn't seem worried, at least one veteran player struck a note of caution.

Olsen, one of the team's captains, said even though it's the preseason it's still important to produce.

"In this league you just can't all of a sudden turn a switch and say we are going to be good now," Olsen said

But the goal now for the Panthers is to get Newton healthy enough for the regular season.

The 2015 league MVP threw passes on the side during practice Monday in sweats and Rivera remains optimistic his ninth-year QB is on pace to play Sept. 8 against the Rams. Newton is also coming off arthroscopic surgery on his throwing shoulder, but his arm strength appears fine.

Newton and the rest of the team's starters will not play against the Steelers on Thursday night.

That means more of Kyle Allen, rookie Will Grier and Taylor Heinicke, three quarterbacks who have two career NFL regular season starts between them.

That lack of experience has been evident in the preseason.

The Panthers managed a paltry 99 yards and seven first downs against the Patriots last week. That came one week after Carolina was limited to 258 yards and one late-game touchdown in a 27-14 loss to the Buffalo Bills in a game that wasn't even competitive.

"The young guys can focus in on what they need to, and quite honestly it gives Cam a little more rest," Rivera said. "Things are going great with Cam's shoulder, so now he's getting a chance to rest a little bit. We're looking at it that way."

Allen, who has been working as Carolina's No. 2 quarterback, has been particularly underwhelming. He completed just 3 of 16 passes for 16 yards against New England and failed to generate any momentum on offense.

"Disappointed, but not discouraged," Allen said of the offense, echoing the coaching staff's message to players.

On paper, the Panthers would appear to have a solid corps of weapons including Newton, McCaffrey, Olsen and speedy wide receivers DJ Moore and Curtis Samuel. But with so little playing time, it has been difficult to get a read on where the Panthers are as the regular season approaches.

"I know everyone on this offense is confident that we can have an explosive just like last year," Allen said.

Notes: Graham Gano has yet to kick in the preseason while recovering from an injury to his plant leg. Rivera said he hopes to know more about Gano's status in the next couple of days. Backup kicker Joey Slye has been a bright spot during the preseason making all six field goal attempts.