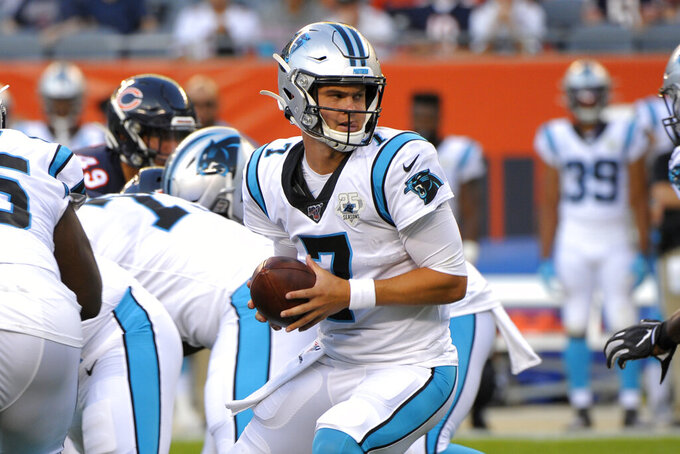 Carolina Panthers quarterback Kyle Allen looks to hand off the ball during the first half of the team's NFL preseason football game against the Chicago Bears on Thursday, Aug. 8, 2019, in Chicago. (AP Photo/Mark Black ) 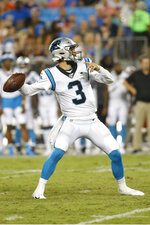 Kyle Allen started the first two preseason games and appears to have the edge over third-round draft pick Will Grier, but the reality is neither QB has taken full advantage of his opportunities — and extra playing time — with Newton resting his shoulder.

Taylor Heinicke was the No. 2 guy last season, but he's dropped to fourth on the depth chart and hasn't been getting as many reps as Allen and Grier in practice.

"That's what they are here for is to compete and find out who the next best guy is," Rivera said.

Carolina's No. 2 quarterback spot has taken on added significance this season with Newton battling back from offseason shoulder surgery. The 2015 league MVP's shoulder strength deteriorated as the season progressed last year and he was barely able to throw 20 yards downfield. He sat out the last two games and had arthroscopic surgery in January.

Newton appears healthier now, but the Panthers want a backup in place before the Sept. 8 season opener against the Rams.

However, a subpar effort by both Allen and Grier against the Bills last Friday night only clouded the QB picture. Allen played into the second quarter but finished 4 of 11 passing for 32 yards. Grier was 10 of 19 for 75 yards with an interception that was returned 71 yards for a touchdown.

"What was disappointing is when you really watched them (on tape) they made some really good decisions, but just delivered some high balls," Rivera said. "They didn't give their teammates a chance to make plays."

But Rivera said he remains confident in all of his QBs.

"Kyle is as resilient and aloof to pressure as I've ever seen in a quarterback," Rivera said. "Will is trying so hard; he's a young guy who wants to learn and do things the right way. He's just got to relax, in my opinion. From what I see, he's just pressing sometimes."

Rivera wants to see Grier make it through his progressions quicker and Allen to improve on his ball placement.

Allen's focus this week has been on cleaning up his footwork and getting the ball out quicker; Grier on learning the nuances of Norv Turner's offense.

"You have good outings and bad outings and you have to improve from them," said Allen, who one game for the Panthers last season as an undrafted rookie. "Just getting through the reads quicker and identifying coverages quicker."

He said speeding up the footwork will help that out.

"The rush is coming so even if something is going to come open you may not have time for it," said Grier, who threw for 3,864 yards and 37 touchdowns last season at West Virginia. "You have to get through (the progressions) and take what is underneath and what is there. That is one of those gray area things where you may be able to make a play if you hold on to it but maybe the right answer is to get the ball out of your hands and let the guy catch it and run."

Allen, Grier and Heinicke are quickly running out of chances to prove themselves worthy of being Newton's backup. Newton is slated to get the majority of work in Carolina's third preseason game on Friday night at New England.

NOTES: The Panthers worked Monday inside their new practice bubble for the first time. It was a little crowded with 90 players still on the roster, but it was clear players were thrilled to catch a break from practicing in the 92-degree heat. "I'm really looking forward to when it gets real cold and starts raining outside," said cornerback James Bradberry. "That's when the bubble will be clutch."