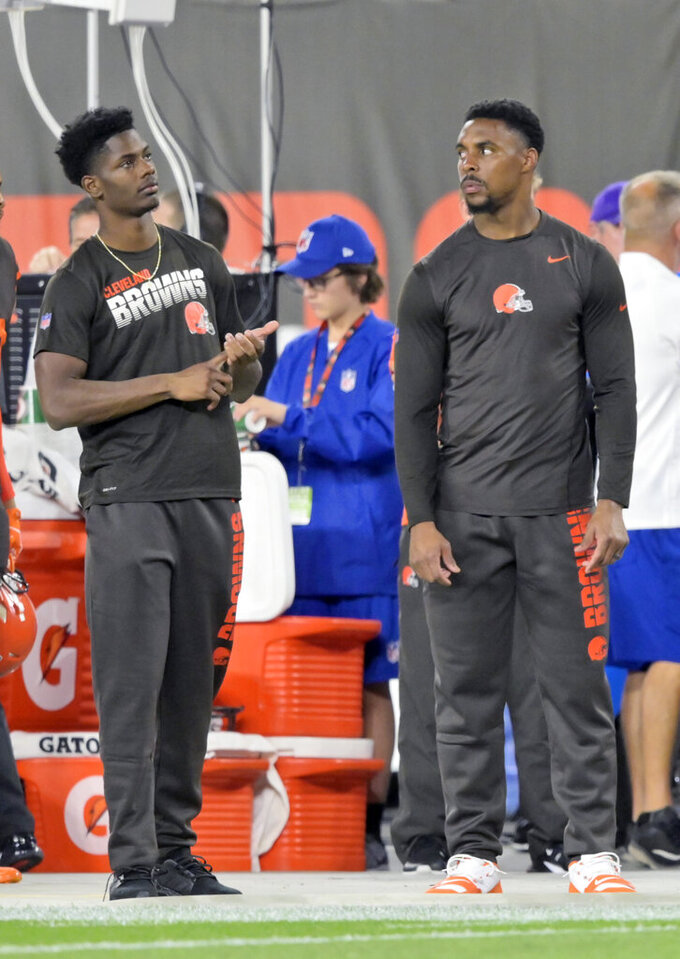 Cleveland Browns cornerback Greedy Williams, left, and strong safety Morgan Burnett watch from the sideline during the first half of an NFL football game against the Los Angeles Rams, Sunday, Sept. 22, 2019, in Cleveland. (AP Photo/David Richard) 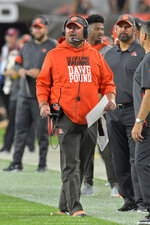 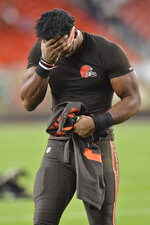 Baker Mayfield and the Browns couldn't finish the job.

With a chance to tie Los Angeles in the final seconds, Mayfield threw three incompletions before being intercepted by Los Angeles safety John Johnson III with 27 seconds left as the Rams avoided an upset with a 20-13 win on Sunday night over the Browns, who gamely stayed with the defending NFC champions despite missing seven starters and their entire secondary.

Mayfield was in positon to pull off one of those comebacks that made him a legend at Oklahoma, but the second-year quarterback who isn't playing with the same confidence he showed as a rookie, couldn't deliver.

"Disappointed more than anything because when you play a team like that, it is all the little things it comes down to," said Mayfield, who finished 18 of 36 for 195 yards. "That is why it was fourth-and-goal right there at the end. It is all the little details to build up to the end, and if you do not take care of them, it will come back to haunt you."

The Browns (1-2) got their final chance after safety Juston Burris, who was only claimed on waivers Friday amid a slew of injuries to Cleveland's defensive backs, intercepted Jared Goff with 2:46 to go.

Mayfield completed a 27-yard pass to Jarvis Landry on third-and-15, and after a 3-yard run, a roughing call on Rams star Aaron Donald gave the Browns first down at the 4.

They were in business.

But Mayfield couldn't connect with Landry in the end zone, the second attempt being tipped away from Rams linebacker Samson Ebukam. On third down, Mayfield looked for tight end Demetrius Harris, when he probably should have thrown the ball to Landry, who had beaten his man on a slant.

"I am going to have recurring nightmares over the throw to Demetrius up top," Mayfield said. "I will be able to look at the film and know I have Jarvis underneath. Just execute. I think that is what it comes down to. Execution down there. Doing your job. We need all 11 guys doing that, and it starts with me."

Not according to Browns first-year coach Freddie Kitchens, who felt it started with him.

Kitchens bemoaned going for a fourth-down play earlier in the quarter and then not running the ball at least once on the last series.

Following the game, Kitchens snapped his gum as he replayed the missed opportunities.

Cleveland's offense still hasn't hit its stride this season, nor has it looked as good as it did over the final eight games last season when Kitchens took over play-calling duties.

The Browns remain under construction.

Kitchens became sensitive with a line of questioning about the difference between the Browns in 2018 and 2019.

"I would not say anything is missing. It takes time to develop offensively. We kind of hit the ground running last year because we had been through eight games already so we know what we were doing. I would say, I have to do a better job during the course of the week of putting these guys in better situations and then on game day.

Mayfield came away encouraged by a lot of what the Browns accomplished.

They were outmanned but stayed with one of the NFL's best teams.

"We are going to get it fixed," he said. "There is no doubt in my mind. It is three games in. We have expectations that we have set for ourselves and we have not met those. I think we need to be realistic with ourselves and know that we have not played to our capability and to our potential. We just have to be better."