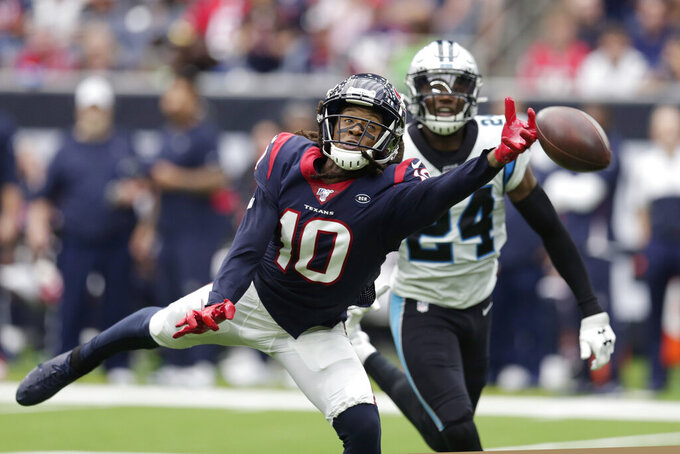 Unfortunately for the Texans their offense only turned those three turnovers into seven points in a 16-10 loss to the Panthers.

"It's very frustrating," quarterback Deshaun Watson said. "Any loss is frustrating but especially when we had the opportunities. The defense created turnovers and we didn't capitalize on most of them."

The Panthers (2-2) took a 13-10 lead with a 55-yard field goal early in the fourth quarter. The Texans (2-2) were driving with about four minutes left when Watson was sacked by Vernon Butler, who caused a fumble that was recovered by Eric Reid at the Houston 33.

Carolina pushed the lead to 16-10 when Joey Slye added a 26-yard field goal with 28 seconds left. Houston had a chance for the win, but Watson's desperation throw as time expired was knocked down in the end zone by Reid.

Coach Bill O'Brien was left searching for answers as to why his offense, which scored 27 points in a win over the Chargers last week, was stifled on Sunday.

Receiver Keke Coutee was disappointed that the offense couldn't cash in on Allen's mistakes.

"It's very frustrating, because we know the players we have in this locker room ... so there's no way we should be putting up that (few) points. We should be unstoppable with our offense ... (and) our defense is playing phenomenal, so we've just got to make plays."

After failing to get any points out of the first two fumbles by Allen, the Texans got to him again early in the third quarter. Houston trailed 10-3 when J.J. Watt swatted the ball out of Allen's hand and pounced on it to give the Texans the ball on the 18-yard line. They tied it when Watson dashed into the end zone for a 1-yard touchdown with about 8½ minutes left in the quarter.

The Texans got left tackle Laremy Tunsil in a trade with Miami just before the season in an attempt to better protect Watson after he was taken down an NFL-high 62 times last season. So far there doesn't seem to be much improvement as Watson was sacked six times on Sunday and has been taken down 18 times this season.

Watson said that their film work made them think that the cornerback would follow the tight end on that play to leave it open for Hopkins to complete the pass. When Watson saw that the cornerback didn't do what they thought he'd do he tried to get Hopkins' attention but it was too late.

"So give them credit for staying disciplined and not running with it," Watson said.

The Panthers took advantage of that mistake five plays later when Christian McCaffrey ran 3 yards for a touchdown to make it 10-3 with about a minute left in the first half.