World traveler Raiders are in contention at the bye 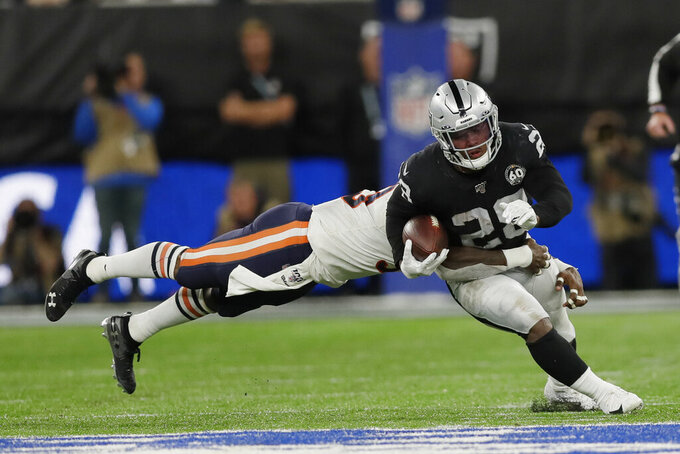 Oakland Raiders running back Josh Jacobs (28) is tackled during the second half of an NFL football game against the Chicago Bears at Tottenham Hotspur Stadium, Sunday, Oct. 6, 2019, in London. (AP Photo/Kirsty Wigglesworth) 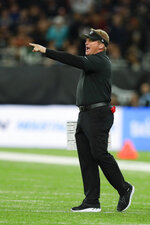 After starting a 48-day stretch without a true home game with another lopsided loss in Minnesota, the Oakland Raiders looked destined for yet another losing season.

Coach Jon Gruden's team responded well instead of spiraling out of control and put together the best back-to-back games since he returned to the sideline last season.

Now the Raiders (3-2) head into their bye week full of confidence and in the thick of the playoff race after following up an upset win at Indianapolis with an even more impressive performance in London against the Chicago Bears.

"We're building our team. That's all I'm going to say," Gruden said. "We're not making any other statements other than that. We like the progress. We like the development of some young guys."

A season that began in the turmoil surrounding star receiver Antonio Brown, who was released two days before the opener, and then featured back-to-back lopsided losses to Kansas City and Minnesota that were all too reminiscent of Gruden's first season back in Oakland, now seems to be headed in the right direction.

The moves made by Gruden and first-year general manager Mike Mayock are paying dividends with expensive free agent acquisitions such as right tackle Trent Brown, receiver Tyrell Williams and defensive back Lamarcus Joyner are all making big contributions, oft-troubled guard Richie Incognito has been mostly on his best behavior and has fueled a strong running game and several rookies are playing major roles.

That youth movement was on full display during the go-ahead, 97-yard TD drive in the 24-21 win over the Bears last week. First-round running back Josh Jacobs started it off with a 15-yard run and had 33 yards on the ground, including the 2-yard TD to cap it.

Fourth-round tight end Foster Moreau caught three passes for 41 yards in the drive and fifth-round receiver Hunter Renfrow converted another first down with a 12-yard catch.

Throw in a strong blocking game from undrafted rookie fullback Alec Ingold, a sack by first-year defensive end Maxx Crosby and solid performances from second-year players such as Kolton Miller and Maurice Hurst, and it appears as if a foundation for success is being built.

"I think we just have a mature, young football team, to be honest," quarterback Derek Carr said. "Our young guys are really talented. It's really nice to have that. We're a better football team this year than we were last year. Coach built a solid foundation. I just want to win. But the cool thing about it now is I could see it last year, we're going to be awesome, I know it. I know we'll be able to play in big games and beat people. That said, no one else believed him, except the people in our building and that's all that matters. I think it's carried over since last year. I think it will continue to grow."

Gruden's first year back was a rough one as the Raiders traded away former building blocks Khalil Mack and Amari Cooper, and stumbled to a 4-12 record that included many games were they weren't even competitive.

A summer of controversy surrounding Antonio Brown that ultimately led to his release and then back-to-back 18-point losses against Kansas City and Minnesota made it look like the same old Raiders again.

But that all changed during a 10-day trip that started with a 31-24 win at Indianapolis and ended with a game that saw the Raiders shut down Mack and beat the Bears by controlling the trenches provide hope that the team might be headed in the right direction before leaving after the season for Las Vegas.

If that continues after the bye, the Raiders will look back at the road stretch that appeared so daunting as a turning point in a positive direction.

The travel doesn't stop after the bye as the Raiders must make two more long trips to Green Bay and Houston before finally returning home for a three-game homestand.

When they began this long stretch away from Oakland, it appeared as if they could have been out of contention when they got back to the Coliseum on Nov. 3 against Detroit.

Now they have a good shot at being in contention in an AFC that has few consistent winners outside of New England and Kansas City.

"We have a long way to go," Gruden said. "We're still in the middle of a long road trip. I don't know when it ends, but there's no time to get too up or too down in this business."