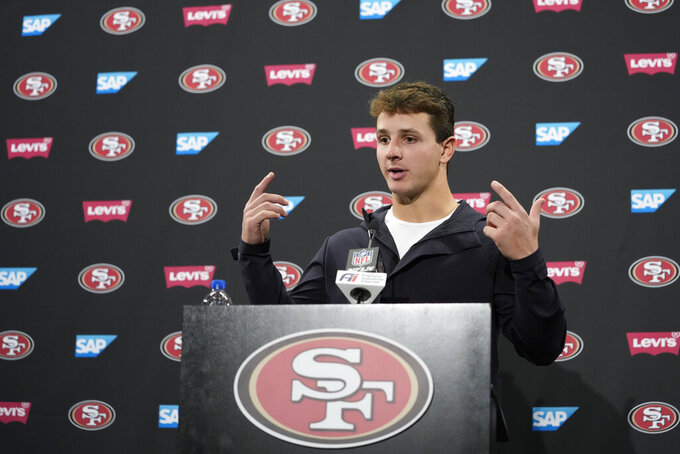 SANTA CLARA, Calif. (AP) — Brock Purdy was 5 days old when Tom Brady played his final college football game, not yet walking when Brady was drafted and a toddler when Brady won his first of seven Super Bowl titles.

When Purdy makes his first career start on Sunday for the San Francisco 49ers against the Tampa Bay Buccaneers, Purdy and Brady will have the same title as starting quarterbacks.

“I think it’s awesome in terms of Tom Brady coming and playing and playing his team, but at the same time, I’m playing the defense," Purdy said Thursday. "I’m going to be going up against those guys rather than Tom himself, but definitely still awesome to have Tom Brady come and play on the same field and compete against our team. I think it’s awesome, so really excited about it.”

While those other six all lost, Purdy could have the best chance thanks to a loaded roster that features the league's top-ranked defense and an offense with playmakers like Christian McCaffrey, Deebo Samuel, George Kittle and Brandon Aiyuk.

He also has a fearlessness that attracted coach Kyle Shanahan to him in the first place.

“He’s very aggressive in what he does,” Shanahan said. "Sometimes that can keep both teams in the game, so that’s stuff that you have to work on as you play more, but that’s where you want to start with it. When a guy can make some plays like he does, he gives you a chance to win, but we have to figure out what’s the best way to win with him.”

Purdy's journey to starting quarterback has been a rapid once since he got the moniker “Mr. Irrelevant” for being the last pick in the draft in the spring.

Purdy got only a handful of practice reps in the offseason program but impressed his coaches and teammates during training camp and the preseason to beat out Nate Sudfeld for a roster spot as a backup behind Trey Lance and Garoppolo.

“I’ve always believed that I don’t care what slot, what round, what pick that I get picked or if I was undrafted, my whole thing was, man, I just want to go out and, and prove to myself that I can play at this level,” Purdy said. “That’s always been my mentality. Even though I was the last pick, that’s just where I happened to fall in the draft.”

The early returns have been positive as Purdy came in after Garoppolo got hurt on Sunday and threw for 210 yards and two TDs in a 33-17 win over Miami.

More important was the poise he displayed in his first extensive game action that was similar to the confidence he showed each day in practice competing on the scout team against the NFL's top defense.

“He’s savvy for being a rookie," linebacker Fred Warner said. “You see him doing the no-look passes and putting the ball where it’s supposed to be. I feel like he’s way advanced in terms of like where he is at for being a rookie. So that’s really impressive to see every week.”