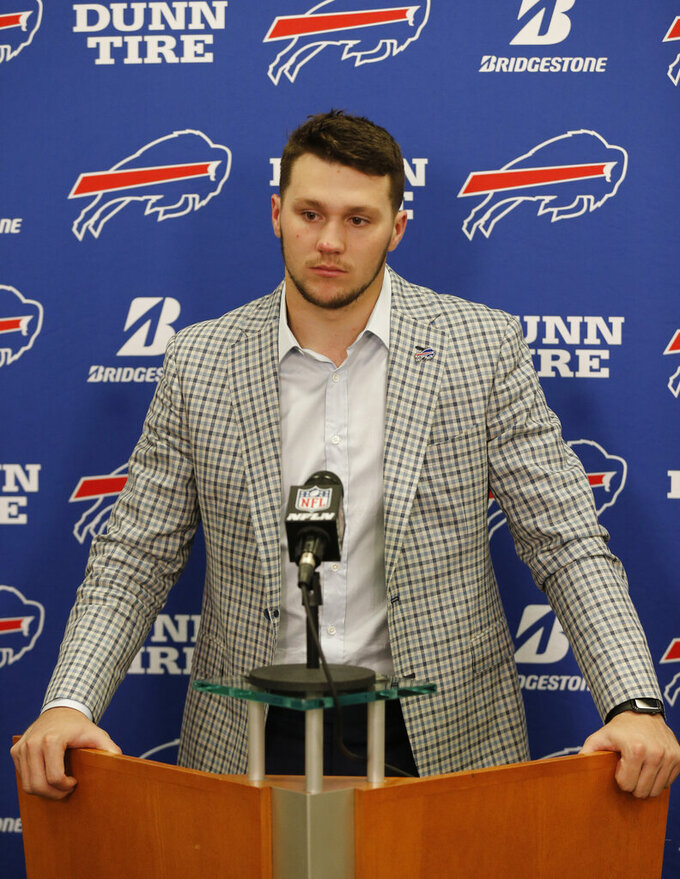 Run, pass or dogsled, for that matter, now that the first snowfall hit Buffalo this week: Daboll's lone objective is for the Bills to start reaching the end zone consistently.

"Score points and win games," Daboll said Monday, a day after the Bills came away with two touchdowns, missed two field goals — and scored another 2 points on a safety — on six drives crossing midfield in a 19-16 loss at Cleveland.

At a time a retooled Josh Allen-led offense, featuring nine new starters, was expected to begin showing signs of progress, the Bills (6-3) instead appear stunted in having lost two of three.

The strong-armed second-year quarterback has thus far shown he's unable to complete a deep pass after several more overthrows against the Browns. And that's led to opposing defenses creeping closer to the line of scrimmage to stop the Bills from running, while all but daring Allen to beat them.

Daboll came to Allen's defense by saying not all of the blame deserves to be placed on the quarterback, while adding he has to do better as a play-caller.

And yet, he proceeded to note how the Bills have struggled taking advantage of mismatches based on defensive alignments.

"We've got to find a way to score more points whether that's running or passing," Daboll said. "When they try to stop one thing, then that needs to open up other things."

Allen's longest completion of the season is a 51-yarder to Cole Beasley in Week 2. He's completed just three others of 40 yards or longer, one of them on a shovel pass and another on a screen.

And even those so-called "chunk" plays have begun drying up. After completing eight passes of 25 yards or longer in its first four games, Buffalo's managed just seven in its past five.

The run game has featured a similar drop-off. Buffalo had 10 runs of 15 yards or more in its first four games, while managing just six in its past five.

The lack of a quick-strike element has forced Allen to oversee lengthy touchdown drives, placing a premium on not making mistakes. Of Buffalo's 20 touchdown drives, 12 have featured eight or more plays from scrimmage.

Against Cleveland, Allen matched a career high with 41 pass attempts, but completed just 22 for a career-best 266 yards. And yet, both touchdowns were scored on Allen runs.

"Any time you complete a deep ball, it helps because it eliminates four or five, six plays within a drive where you have to execute," Daboll said. "You have to be able to call them and execute them, and even if you don't execute them that helps in the long run."

Goal-line defense turned the ball over on downs after the Browns had eight snaps from inside the Buffalo 2 and were unable to score on a series extended by two defensive pass interference penalties.

Forcing takeaways. The lone turnover Buffalo has forced in the past three games was a fumble recovered on a punt return in a 31-13 loss to Philadelphia.

Tre'Davious White continues to solidify his place as one of the league's top shut-down cornerbacks. In shadowing Odell Beckham Jr. for a majority of the game, White was credited with a game-leading four passes defensed. Beckham finished with five catches on 12 targets for 57 yards.

Stephen Hauschka is no longer performing to his "Haush-Money" reputation, and on the heels of signing a two-year contract extension in August. Hauschka missed both field-goal attempts against Cleveland, including a 53-yarder in the final seconds that went wide left. He's missed six consecutive attempts of 49 yards or longer going back to last season.

He also missed a 34-yarder against the Browns, marking the first time he's missed an attempt from inside 39 yards since 2016.

Four weeks after a 31-21 home win over Miami, the Bills head to Florida to face the Dolphins on Sunday.