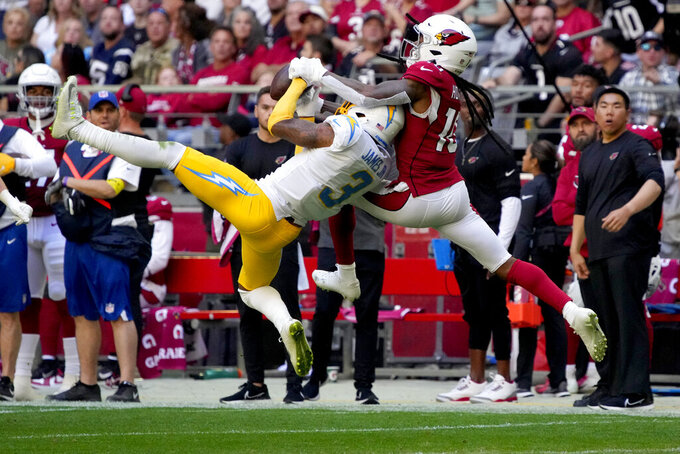 Add Derwin James to the extensive list of Los Angeles Chargers players whose status for Sunday night’s game against the Miami Dolphins is questionable.

The Chargers said the fifth-year safety didn't participate in practice Wednesday because of a lingering quadriceps injury. Coach Brandon Staley conducted a walkthrough instead of a full practice, so the team's report is an estimate of what players' participation would have been.

James first suffered the injury during the Nov. 27 game at Arizona. He played all 61 defensive snaps in last Sunday’s 27-20 loss to the Las Vegas Raiders.

When asked how concerned he was about James’ injury, Staley said, “we’ll see. He’s going to be day-to-day.”

James leads NFL defensive backs with 106 tackles. He is also one of five players in the last three decades to have at least 100 tackles, four sacks, multiple forced fumbles, and an interception through the first 12 games of a season.

James’ absence would leave a significant void as the Chargers prepare to face a Dolphins passing attack that has thrived under first-year coach Mike McDaniel. Tua Tagovailoa is the league’s highest-rated passer (112.0), Tyreek Hill leads the league with 1,379 receiving yards, and Jaylen Waddle is fifth with 972.

Cornerback Bryce Callahan is battling a groin injury and was listed as limited on Wednesday.

Staley got some better news about some offensive starters. Wide receiver Mike Williams will practice this week after missing four of the last five games with a high right ankle sprain. Staley said center Corey Linsley is “progressing through the (concussion) protocol” after he missed the Raiders game. Right tackle Trey Pipkins continues to have a knee issue and is unlikely to practice.

Miami (8-4) currently occupies the sixth playoff spot in the AFC, while the Chargers and New England are one behind the New York Jets for the final spot.

By Mark Anderson And Brett Martel 12 minutes ago
By Teresa M. Walker an hour ago
By John Marshall 2 hrs ago
By Greg Beacham 2 hrs ago
By Tom Withers 2 hrs ago