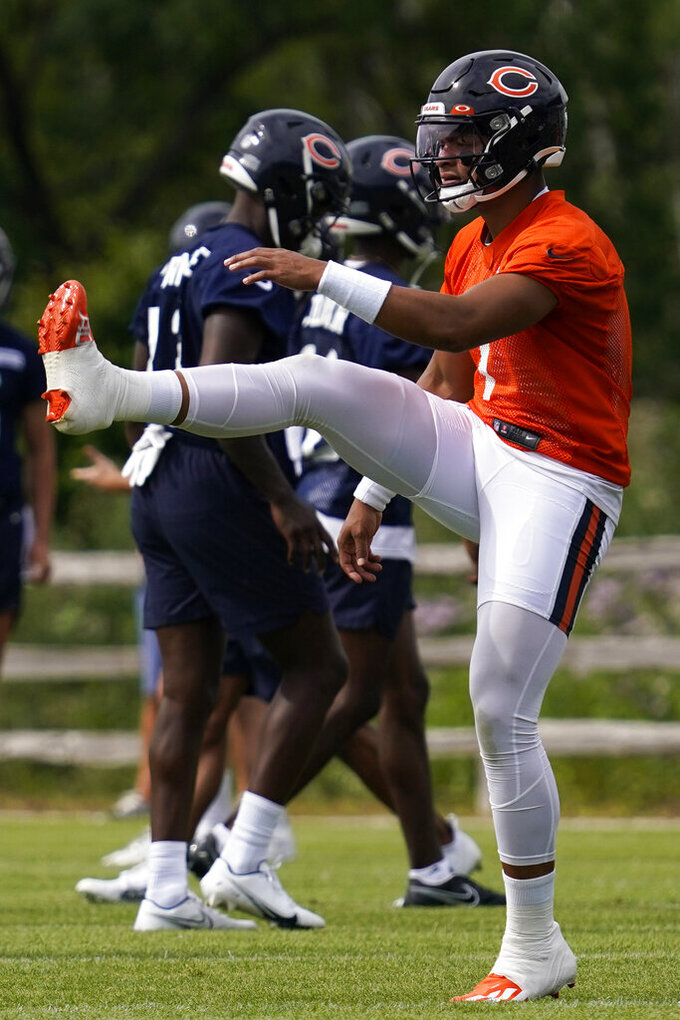 LAKE FOREST, Ill. (AP) — Justin Fields showed up to training camp with his sights set squarely on his future and his mind on a notable failure.

The quarterback comes into his second season with the Chicago Bears hoping to convince a new general manager and coach that he is the right person to lead the NFL franchise for years to come.

He's looking to take a big step coming off a difficult rookie year. And he's letting his failures give him an extra nudge.

“Failure pushes me to go even harder,” Fields said.

Failure, he said, can be a great motivator. One in particular stands out to him.

It happened during the 2019 College Football Playoff semifinals, in the closing minute of Ohio State's 29-23 loss to Clemson in the Fiesta Bowl.

Trevor Lawrence had just led the Tigers on a four-play, 94-yard touchdown drive, finishing it with a 34-yard pass to Travis Etienne. Fields took the Buckeyes 52 yards to the 23 when the season ended in crushing fashion.

He waited in the pocket on second-and-7 before firing to the end zone for what he hoped would be the winning TD on a post route to Chris Olave. The problem was Olave broke left as the ball was released and fell.

That led to an easy interception for Nolan Turner, sending runner-up Clemson to the championship game against LSU. As the Tigers celebrated, Fields stood with his hands on his head.

“That catapulted us that next offseason into a whole different mindset,” he said. “So just stuff like that. Responding back to that and knowing how to respond from failures and stuff like that.”

The Buckeyes bounced back to beat Clemson in the semifinals the following year before losing to Alabama. And Fields is banking on the lessons he learned from his difficulties as a rookie to help propel him in a big way this season.

The Bears are, too.

“We’re going to continue to add things to the offense,” general manager Ryan Poles said. “And he’s going to have to continue to grow based on what he sees and (what) the defense throws at him, continue to make plays and I think he’s doing everything he’s supposed to. We’re excited in that direction. And I think one of the most important pieces is that command. Continue to bring that command and that leadership.”

Fields is in a far different spot than he was a year ago.

The plan under the previous regime was to have him essentially redshirt the season after the Bears traded up with the New York Giants to draft the former Ohio State star with the No. 11 overall pick. That changed after Andy Dalton suffered a knee injury against Cincinnati in Week 2.

Fields got thrust into the starting role and finished with more interceptions (10) than touchdown passes (seven) and an unimpressive 73.2 passer rating. Chicago's offense ranked among the worst in the NFL.

The Bears finished 6-11 and missed the playoffs for the ninth time in 11 years. That convinced chairman George McCaskey to make sweeping changes and fire former GM Ryan Pace and coach Matt Nagy.

“He's a natural born leader type of guy,” offensive coordinator Luke Getsy said. "So we’re lucky to have a guy like that leading this thing.”

The Bears didn't make any splashy acquisitions on offense and bring in a playmaking star to help their young quarterback. They're banking largely on improvement from within and contributions from newcomers such as receiver N’Keal Harry, a 2019 first-round pick acquired from New England two weeks ago.

But Fields can take comfort knowing he is the starter, that he's working with the first team from the get-go. That's another big change from a year ago.

“Every situation you’re going to be put in is not going to be ideal,” Fields said. "So even if it wasn’t, you just kind of have to deal with it.”

Now, Fields is a big question mark. It's up to him to show he can also be the answer.

“I’m not really worried about showing the league anything,” Fields said. "I’m just worried about winning games. I’m not trying to prove myself to anybody.

Note: Getsy had no update on C Lucas Patrick, who left practice Thursday with an unspecified injury. Getsy said he didn't see what happened.