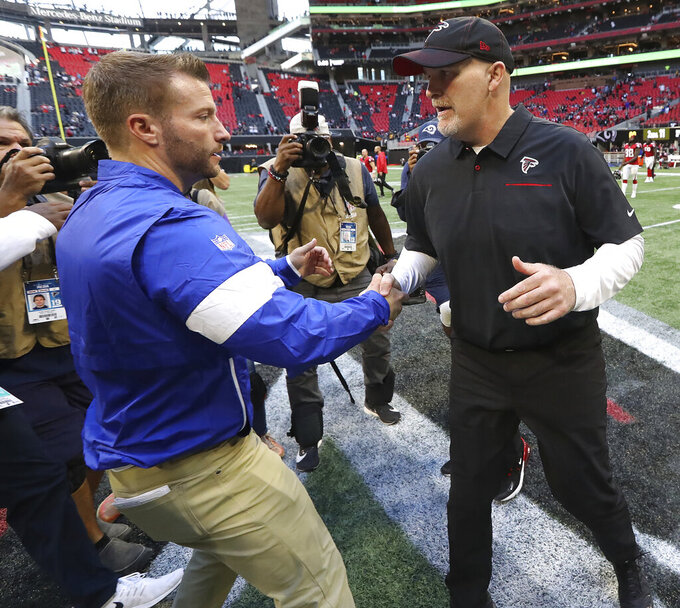 Quinn, in his fifth year as the Atlanta Falcons' coach, watched what might have been his team's worst performance of the season Sunday, a 37-10 loss to the Los Angeles Rams.

He came across as a sympathetic figure while speaking with reporters after the game. Quarterback Matt Ryan had been hounded all day and knocked out of the game in the fourth quarter with ankle and foot injuries. His defense, already the NFL's worst in most statistical categories, was torched again.

And special teams utterly fell apart — missing a field goal, allowing a fake punt, giving up a long punt return, botching an onside kick and fumbling away a punt for a touchdown.

Yet despite the latest evidence, Quinn said he didn't think the season, at 1-6, is entirely lost. His teams have dropped 11 of their past 15 games and have almost no hope of turning this season around.

Quinn, who led Atlanta to the 2016 NFC title, insisted he's still the right choice for the job and added he has no plans to step aside as defensive coordinator, a role he assumed after last season.

But he looked like a man out of answers as he stepped down from the podium and over a few steps where Falcons owner Arthur Blank waited to give him a big hug. Blank said after huddling briefly with Quinn that he has no immediate plans to make a change and fire the coach.

"It's very disappointing for everybody," Blank said. "We understand that it is."

During the team's stay in Arizona two weeks ago, Quinn made some adjustments in defensive play-calling, appointing some of his assistants to help out during games and allow him to concentrate more on the big picture.

Nothing has worked. The Falcons have lost five straight and have another tough assignment next week against contending Seattle.

Players have said throughout the season that they are to blame for not executing the game plan, and defensive end Vic Beasley said that was the case again this time.

The Falcons allowed five sacks, as many as their defense has registered all year. They trailed by double digits at halftime for the fifth time and have been outscored by an aggregate 120-50 in the first half.

Devonta Freeman finally snapped in frustration early in the third quarter and was ejected for throwing a punch at Rams defensive tackle Aaron Donald. Freeman's departure left Atlanta with third-stringer Brian Hill and return specialist Kenjon Barner at running back. Top reserve Ito Smith was carted off the field at the end of the first quarter with head and neck injuries.

Quinn will take the only course of action he knows, getting everyone back together Monday at team headquarters to dissect the latest loss.

"At the end of the day, it still counts on the performance," he said. "That's what you look to and when you're not meeting it, there's lots of reasons. That's why I try to spend most of my time saying, 'OK, how do we make sure all three phases can get connected to do it?' But you don't hit in one area, two areas or all three, you want to keep digging for the answers. It's definitely frustrating."