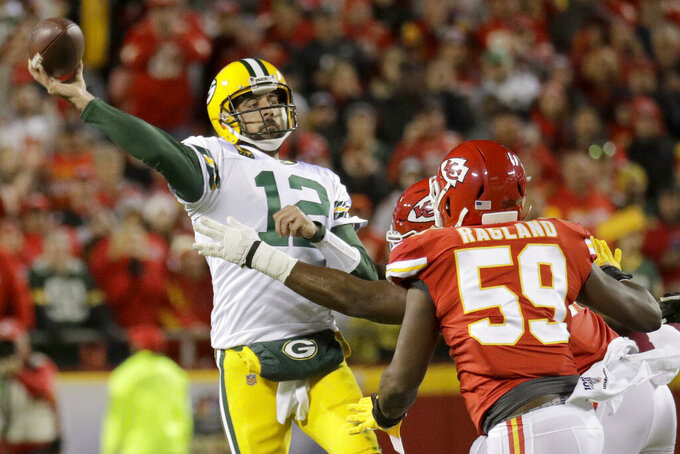 CARSON, Calif. (AP) — Despite being among the top quarterbacks in passing yards, Aaron Rodgers and Philip Rivers find themselves going in opposite directions heading into Sunday's game.

Rodgers and his Green Bay Packers (7-1) are off to their best start since 2011 while Rivers and the Los Angles Chargers (3-5) have dropped three of their past four.

Rodgers, who is second with 2,324 yards, has been revitalized under Matt LaFleur, who is the first coach in his first year to win seven of his first eight games since Jim Harbaugh in 2011. Chargers coach Anthony Lynn is hoping a change in offensive play-callers can jump-start his team after Ken Whisenhunt was fired as coordinator on Monday and replaced by quarterbacks coach Shane Steichen.

"It's obvious these first eight weeks that we just haven't been good enough, offensively. There were a handful of games where we should have scored more points and won games," said Rivers, who is third in the league with 2,315 yards.

The Chargers have been out of synch offensively for most of the season. They have been held under 40 rushing yards in four straight games, becoming the first team since the 1947 Detroit Lions to be stuck in neutral that long.

Green Bay comes in as one of the more potent offenses in the league. Aaron Jones is tied for second in rushing touchdowns with eight while Rodgers had a league-leading 21 completions of 20 yards or more in October.

"I think we've definitely found different recipes to victory every week. I think the staples are there, though. We're gaining confidence every week," Rodgers said.

CAN GORDON GET IN GEAR?

Another player who could benefit from the Chargers change at offensive coordinator is Melvin Gordon. The running back missed two months because of a contract dispute and is averaging only 2.6 yards per carry with one carry over 10 yards in four games.

The Chargers had only 12 running plays in last week's win at Chicago, but Lynn has hinted that he wants to see more carries and consistency on the ground.

HOME GAME IN NAME ONLY

The Chargers haven't had much of a home-field advantage this season. After going 10-6 at their tiny stadium in Carson, California, the past two seasons, they have dropped their past three. They've also felt like the visiting team in recent games against Denver and Pittsburgh.

The Packers made the L.A. Memorial Coliseum feel like Lambeau West during their game against the Rams last season and figure to have an even bigger noise advantage on Sunday. Due to the limited capacity, resale prices are more than $300, making it one of the higher-priced games on the secondary market this season.

Rodgers said when Green Bay faced the Chargers in San Diego in 2011, he remembered Rivers having to go to a silent count a couple of times because of Packers fans noise.

"I'm sure it's tough for the home team as they wait for their stadium to be built to have those home games be more like road games when a team like Green Bay comes to town," Rodgers said. "It's obviously small for an NFL stadium, big for a soccer stadium, and a really nice environment. There's shouldn't be any bad seats in the house."

Green Bay wide receiver Davante Adams, who missed the past four games because of turf toe, returned to practice this week. He was listed as limited on Wednesday and Thursday, but said he is not having much pain running routes.

"Once you can push off and get out of your stance you can stride out and really run the way you could when you were healthy. That's how I'm feeling now," Adams said on Thursday.

The Packers and Chargers are two of the top three teams when it comes to using their running backs in the passing game. The Chargers are tied with Patriots for the league lead in backfield receptions with 73 while the Packers are third with 63.

Los Angeles' Austin Ekeler leads running backs in receptions (51) and receiving yards (507). He is on pace to become the first back in league history to have 100 or more catches and 1,000 yards in the same season.

Aaron Jones had a career-high 159 receiving yards on seven receptions and scored two touchdowns last week. It was the second-most receiving yards in a game by a Packers running back.

Green Bay LB Za'Darius Smith and Los Angeles DE Joey Bosa are on a roll when it comes to sacks.

Smith is tied for fourth in the league with eight sacks and had two in last week's win at Kansas City, Bosa, who is tied for seventh with seven, is the first Charger to get multiple sacks in consecutive games since Kevin Burnett in 2010.