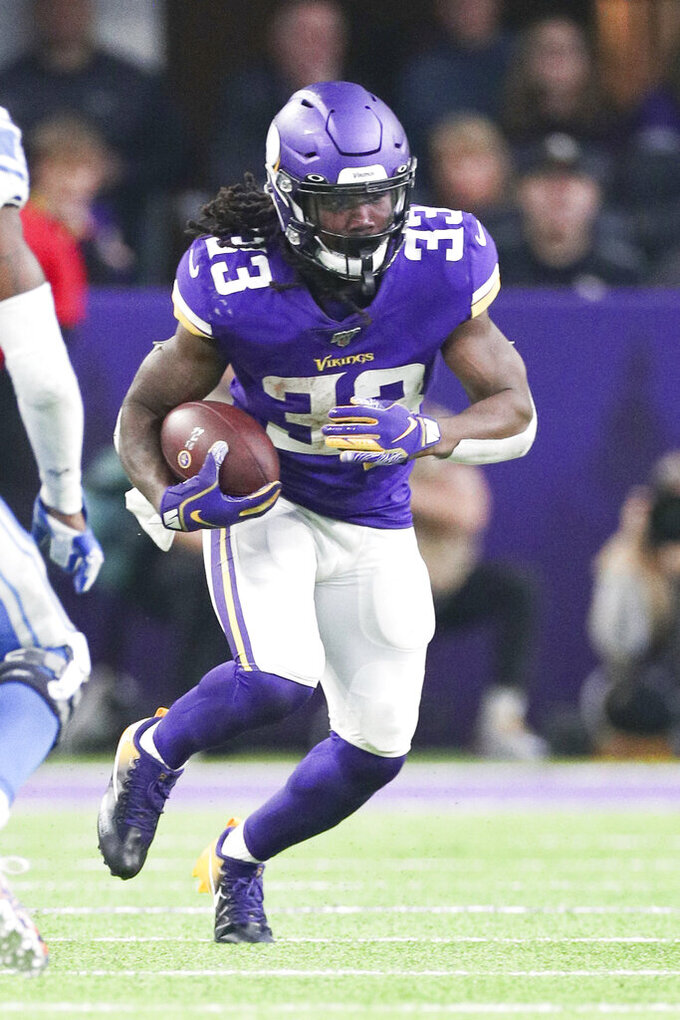 Minnesota Vikings running back Dalvin Cook (33) carries the ball in an NFL game against the Detroit Lions, Sunday, Dec. 8, 2019 in Minneapolis. The Vikings defeated the Lions 20-7. (Margaret Bowles via AP) 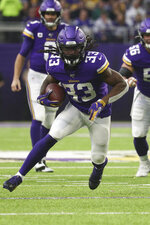 NEW ORLEANS (AP) — The Dalvin and Alvin show is coming to the Superdome.

And the stakes are a lot higher than the last time they shared the stage as NFL debutants three seasons ago.

Vikings running back Dalvin Cook and Saints rusher Alvin Kamara look primed to play pivotal roles when New Orleans (13-3) hosts Minnesota (10-6) on Sunday in the wild-card round of the NFC playoffs.

They are two of the most dynamic running backs in the league capable of breaking off big gains as runners or receivers.

Saints coach Sean Payton said Cook, who is returning from a shoulder injury that sidelined him the last two weeks of the regular season, has a “substantial” influence on Minnesota's offense.

“He has extremely good balance. He's a strong runner and has outstanding speed,” Payton said. “You watch countless 15- to 25-yard gains by him and that's hard to do.”

Vikings coach Mike Zimmer sounds as if he could be talking about Cook when he is in fact discussing the challenge Kamara presents to Minnesota's defense.

“He’s extremely shifty in the way he runs, but he’s a physical runner as well,” Zimmer said. “Catches the ball out of the backfield, runs good routes. The thing that impresses me is that not very often does one guy bring him down. He slips and steps up out of tackles. ... He can go the distance at any time.”

Cook had the better NFL debut, gashing the Saints for 127 yards rushing in a 29-19 Vikings victory to open the 2017 season.

But while Cook's rookie campaign was ended prematurely by a major knee injury, Kamara blossomed into the offensive rookie of the year, with 1,554 yards and 13 TDs from scrimmage in 2017.

This season was Kamara's least productive because of nagging knee and ankle ailments that sidelined him for a couple midseason games. But Kamara increasingly regained form as the playoffs approached, rushing for four touchdowns in the past two weeks.

Cook is making his playoff debut after fulfilling the promise he showed before tearing up his knee in October of 2017. In 14 games this season, he gained 1,135 yards and scored 13 TDs rushing while catching 53 passes for 519 yards.

“You've seen the kind of football that we play with him,” Vikings receiver Stefon Diggs said of Cook. “He definitely changed the game.”

Cook said he feels “refreshed” and that the Vikings' relative good health puts them in position to compete with a Saints squad that tied for the top record in the NFC, but missed out on a bye in a three-way tiebreaker with San Francisco and Green Bay.

“No matter what they did during the regular season, new season, new start,” Cook said. “Everybody’s going to be ready to go. It should be a fun matchup.”

With Cook and backup running back Alexander Mattison set to return from their injuries and wide receiver Adam Thielen back on track after an extended absence, quarterback Kirk Cousins will have his full complement of pass-catchers and ballcarriers for the first time in 2½ months. Thielen took only 16 snaps during a seven-game span because of a hamstring injury and finished the 2019 regular season with only one 100-yard game, down from nine in 2018.

“We’re excited to have him as a part of this attack,” offensive coordinator Kevin Stefanski said of Thielen. “We’ll see how the game unfolds. If it calls for a big day from him, I think he’ll be ready.”

Saints tight end Jared Cook had a slow start to the season after joining New Orleans as a coveted free agent. Lately, however, his production has spiked as his chemistry with record-setting passer Drew Brees grows. He has seven touchdowns in his past seven games.

“Any 1-on-1 matchup, there’s not a guy on defense that’s going to match his size,” Brees said. “You always feel like there is a place where you throw the football where he can get it and other guys can't.”

The last time these teams met in the playoffs two seasons ago, the Vikings won 29-24 thanks to the “Minneapolis Miracle,” the 61-yard touchdown reception by Diggs on the final play. Dalvin Cook, who could not play in that game because of his knee injury, had one of the better views of the catch from the sideline.

“It’s one of those plays that’s going to last forever,” Cook said. “It’s in the Vikings’ history, and it was a great moment for this organization. They want revenge.”

Vikings tight end Irv Smith Jr. has reached the playoffs as a rookie, something his father never did in five seasons with the Saints. The elder Smith finally got there in 1998 with San Francisco. Smith Jr., who set the Vikings record for most receptions by a rookie tight end with 36, has a good grip on what type of environment to expect in his native New Orleans.

“It’s going to be crazy," said Smith, a second-round draft pick out of Alabama. “I know the city shuts down during Saints games. Especially this playoff game.”