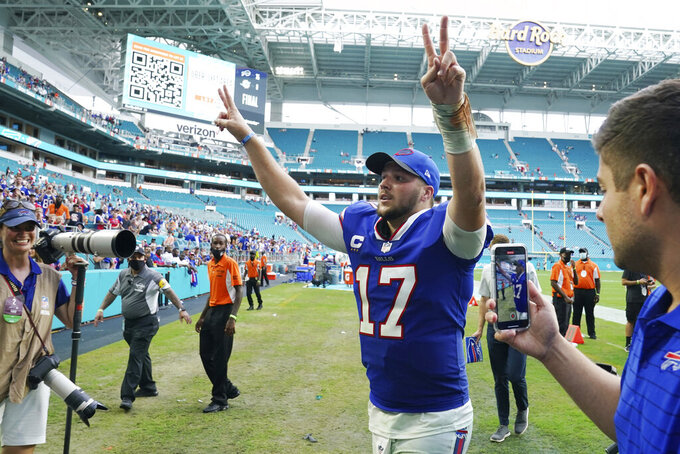 Judging NFL teams after one game has always been foolish. It’s even more absurd in a 17-game season.

The Bills, Titans, Ravens, Browns, Bears and Washington lost their season openers after making the playoffs last season. No panic. Each team rebounded with a victory in Week 2. The Packers look to join the group Monday night.

The Cowboys, a favorite to contend in the weak NFC East, also lost their opener to the defending Super Bowl champion Buccaneers on a late field goal. They bounced back with a last-second win of their own on the road against the Chargers on Sunday.

“This is how the NFL works, right? We understand that,” Buffalo coach Sean McDermott said following a 35-0 win at Miami. “That’s why we have to stay humble. I saw a hunger in our football team this week. We’ve got plenty to work on though. That’s what we’ve got to get back to. We’ll start on the plane as coaches, start watching the film, and try to improve every week. That’s the goal.”

The Bills, who lost the AFC title game at Kansas City last January, showed why they’re the class of the division after stumbling at home against Pittsburgh. Josh Allen was efficient while earning his first win since signing a big contract. Beating Miami is nothing new for Buffalo, which has won six in a row in the series by an average of 20 points.

Tennessee avoided a 0-2 start with an impressive comeback at Seattle, rallying from a 14-point, fourth-quarter deficit. Derrick Henry ran for two TDs in the final 12 1/2 minutes, Ryan Tannehill threw for 347 yards and the Titans racked up 532 yards in the overtime win.

The reigning AFC South champs responded well after a blowout loss at home to Arizona in their opener.

“I think that (performance) was certainly who we are,” Titans coach Mike Vrabel said of the win.

Baltimore overcame an 11-point deficit in the fourth quarter to beat the Chiefs 36-35 on Sunday night, just six days after blowing a 14-0 lead in an overtime loss at Las Vegas. Lamar Jackson ran for 109 yards and two TDs, including 2 yards on a fourth-and-1 from the Ravens 43 with 1:05 remaining to seal it.

It was a gutsy call from coach John Harbaugh, whose team has persevered despite a rash of season-ending injuries to key players.

Cleveland, which blew a double-digit lead in a playoff rematch against Kansas City in the opener, fell behind Houston early, tied it up at halftime and pulled away after Texans quarterback Tyrod Taylor was injured.

It was a costly win, however, as wide receiver Jarvis Landry suffered a medial collateral ligament injury on the second play. Baker Mayfield still had plenty of options, relying on tight ends and running backs.

The Bears lost Andy Dalton to a knee injury in a 20-17 victory over Cincinnati, giving Justin Fields an opportunity to play the second half and possibly longer. Fields didn’t do much, but Chicago’s defense held Joe Burrow and the Bengals to 248 yards after Matthew Stafford and the Rams torched the Bears in Week 1.

Fields will have to do more than 6 of 13 for 60 yards for the Bears to have any shot at going back to the playoffs.

“I’m just anxious to see what I messed up on and what I have to do better,” Fields said. “I didn’t play well. In my eyes, I played well enough to get the win, of course, but there’s a lot of room for me to improve.”

Ten days after he nearly led Dallas to an upset over Tom Brady and Tampa in a thrilling season opener, Dak Prescott made sure the defense couldn’t give one away. He was terrific in Los Angeles, leading the Cowboys on a winning drive completed when Greg Zuerlein hit a 56-yard field goal as time expired.

Dallas allowed Justin Herbert to throw for 338 yards but held the Chargers to 17 points. Not bad for a defense missing key starters.

On the flip side, the Eagles and Saints got reality checks after opening the season with lopsided wins.

Philadelphia played more like last year’s 4-11-1 club after looking like a team that could go worst to first. Jalen Hurts couldn’t do much and the offense was shut down in a 17-11 loss to San Francisco.

New Orleans, which played like a Super Bowl contender in a 38-3 rout over Green Bay, sure missed Drew Brees. Jameis Winston threw for only 111 yards and had two picks in a 26-7 loss at Carolina after tossing five TDs against the Packers.

It’s a long season. Fifteen games to go. Only seven teams will remain winless through two weeks unless the Lions-Packers tie Monday night.