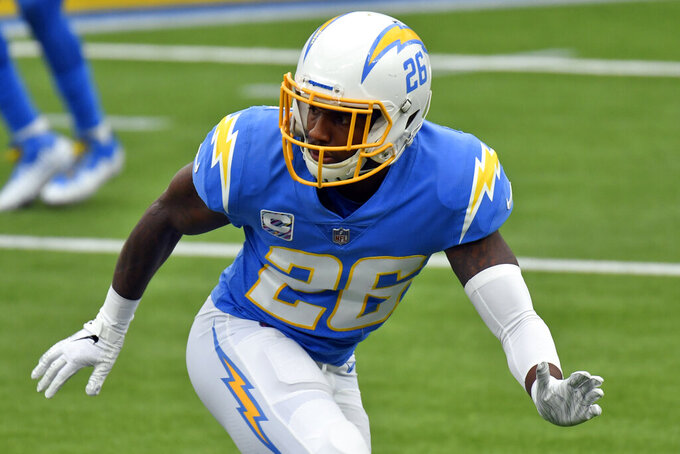 FILE - In this Oct. 25, 2020, file photo, Los Angeles Chargers cornerback Casey Hayward watches the play during the first half of an NFL football game against the Jacksonville Jaguars in Inglewood, Calif. Hayward Jr. was released by the Los Angeles Chargers on Saturday, March 13, 2021. The cornerback spent five seasons with the franchise after signing as a free agent in 2016. (AP Photo/Kyusung Gong, File)

COSTA MESA, Calif. (AP) — Casey Hayward Jr. was released by the Los Angeles Chargers on Saturday. The cornerback spent five seasons with the franchise after signing as a free agent in 2016.

“While the decision to add Casey to the team was obviously one of the best free agent signings we have ever made, this roster-related decision is one of the most difficult," general manager Tom Telesco said in a statement. "Casey is the consummate professional and a shining example for everyone who aspires to play in the NFL.”

Hayward Jr., who was a team captain, played in 14 games with 13 starts last season with an interception and eight passes defensed. He was inactive for the Nov. 29 game at Buffalo, snapping a streak of 107 consecutive games played.

He was the AFC Defensive Player of the Week after a career-high 12 tackles in a 20-17 win over Cincinnati on Sept. 13, but struggled in coverage most of the season, especially on deep routes.

During his five seasons with the Chargers, Hayward Jr. had 66 passes defensed, which led the AFC during that span. He led the NFL with seven interceptions in 2016 and was selected to the Pro Bowl in 2016 and '17.

Hayward Jr.'s release comes with a salary cap savings of $9.5 million. Telesco said during a recent news conference looking ahead to free agency and the draft that the defense must improve in generating pressure and takeaways.