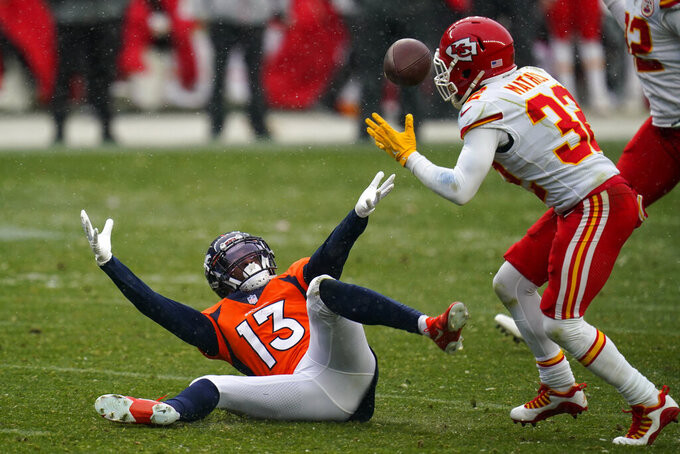 DENVER (AP) — On a freezing afternoon in the snow, Patrick Mahomes barely broke a sweat.

The Kansas City Chiefs routed the Broncos 43-16 for their 10th consecutive win over Denver despite failing to convert a single third down (0-for-8) and getting just 200 yards and at touchdown from their star quarterback.

The Chiefs got a pick-6, a kickoff return for a TD, two rushing TDs, including one from his backup, and three field goals to more than make up for Mahomes' pedestrian numbers.

“I deal with him every day and all he wants to do is win,” Chiefs coach Andy Reid said. “It’s crazy. You know how he’s wired. But that’s what’s real every day. He wants to rip your heart out when he’s out there playing. He wants to do well and do all that. But when other people are scoring, he’s jumping up and down, likewise. He just wants to win. That’s the beauty of him.”

“Whenever you feel like you don’t play a great game offensively and you win by 27 it’s a good feeling,” Mahomes said. “A win’s a win."

And for Denver, a loss is a loss. Again.

“I can play a whole lot better, and I'm going to," said Broncos QB Drew Lock, who threw for 254 yards with no TDs and two interceptions.

Mahomes completed 15 of 23 passes but said he only worries about results, not statistics.

“A young Patrick would’ve probably tried to force it and thrown a ball and maybe made a bad interception or something like that,” Mahomes said, relaying a conversation he had with teammate Tyrann Mathieu. “Whereas, now, seeing the way the defense was playing and knowing it’s not there, just kind of either taking the sack or not completing the pass and throwing it away" is the way to go.

The Chiefs (6-1) found other ways to dominate Denver (2-4) on a snowy afternoon that began with a temperature of 14 degrees at kickoff, the coldest October game in Broncos history.

Kansas City took a 24-9 halftime lead even though Mahomes completed just one pass in the second quarter and had only 99 yards through the air in the first half.

Mahomes finally extended his NFL-leading streak to 17 consecutive games with a touchdown throw when he hit Tyreek Hill from 10 yards to make it 37-9 with 11 minutes remaining in the fourth quarter.

Mahomes’ lone TD throw followed the Chiefs’ fourth takeaway, an interception by Mathieu when rookie KJ Hamler let Lock’s pass bounce off him and right into the arms of the Chiefs star safety.

A week after the Chiefs ran more times than they threw it for the first time in Reid’s eight seasons in Kansas City, it was K.C.’s ground game, special teams and defense that did the damage in Denver in the NFL’s first snow game of 2020.

In the first half, the Chiefs scored touchdowns on Byron Pringle’s 102-yard kickoff return and Daniel Sorensen’s 50-yard interception return to go with Clyde Edwards-Helaire’s 11-yard run in which he broke five tackles.

"You're not going to beat a team like Kansas City doing that,” lamented Broncos coach Vic Fangio, whose team has been outscored 96-25 in three games against the Chiefs.

Edwards-Hilaire carved his way through a wall of Denver defenders to open the scoring on a snowy, freezing afternoon.

Running up the middle, the rookie plowed through linebacker Alexander Johnson and defensive backs Kareem Jackson, Bryce Callahan, Justin Simmons and Michael Ojemudia like a bowling ball knocking down pins.

The Broncos responded with Lock’s first career touchdown run, from 2 yards, but Brandon McManus missed the extra point, leaving Kansas City ahead 7-6, and the Chiefs would never trail.

This game marked the first time running backs Melvin Gordon and Phillip Lindsay were both healthy since the opener, but Lindsay went out with a concussion just before halftime after gaining 79 yards on nine carries. He didn’t return.

Gordon, who missed last week's win at New England with strep throat a few days after his arrest for driving under the influence, scored a touchdown but turned the ball over twice, including on a failed flea flicker on Denver's first drive of the second half.

Frank Clark recovered the loose ball, leading to a field goal and a 27-9 lead.

Le'Veon Bell ran six times for 39 yards in his Chiefs debut, and Edwards-Helaire had 46 yards on eight carries.

Lock gave Broncos fans a scare on a scramble, falling awkwardly when his left knee brace got caught in the grass.

“That was weird. I've worn that brace for three years now and never once has that happened to me,” Lock said. “I tried to stand up and the brace was locked, so that's why I had to fall back down. Because if I was to keep trying to stand up, both ends of that brace were going to cut me.”