Dolphins' Ryan Fitzpatrick says he wants to be back in 2020 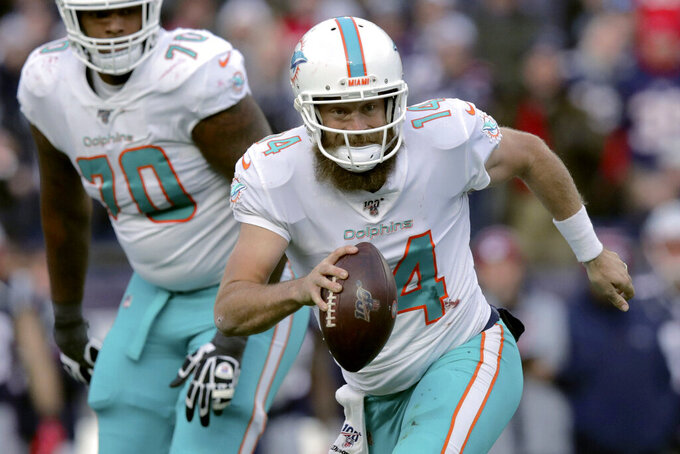 FILE - In this Dec. 29, 2019, file photo, Miami Dolphins quarterback Ryan Fitzpatrick scrambles during the second half of an NFL football game against the New England Patriots in Foxborough, Mass. Fitzpatrick says he wants to play next season at age 37, and he'll likely be back with the Miami Dolphins. Coach Brian Flores said last week he expected Fitzpatrick to return. (AP Photo/Charles Krupa, File)

MIAMI BEACH, Fla. (AP) — Quarterback Ryan Fitzpatrick said Friday he wants to play next season at age 37, and he'll likely be back with the Miami Dolphins.

Fitzpatrick started the final 12 games last year for the Dolphins, who went 5-11 but had a surprisingly strong finish under first-year coach Flores. Fitzpatrick, a 15-year veteran, ended the season saying he was undecided about whether to retire.

“I want to keep playing,” Fitzpatrick told the Dolphins' flagship radio station, WQAM, at the Super Bowl media center. “Physically you have to re-evaluate everything. and mentally and emotionally. It didn’t take very long for me to know, with the season we had and how much fun I had out there. I want to keep playing.”

Fitzpatrick is under contract with Miami for $5.5 million in 2020.

The Dolphins have the fifth pick in the April draft, and there's speculation they'll take Alabama quarterback Tua Tagovailoa. Fitzpatrick said that's fine with him.

“The best thing for me to do is to go in and be myself and show my work ethic, and hope that grows on the younger guys,” Fitzpatrick said. "I really enjoy helping younger guys. I have no problem with that."