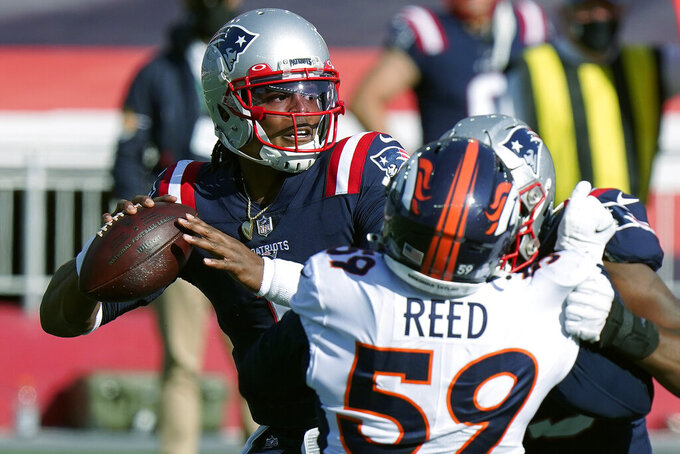 Not a bad impression, though.

Same sort of thing as last year, too, when the Denver Broncos outside linebacker took over for a sidelined Bradley Chubb.

Lately, Reed's been quite a handful. He's had two sacks in each of the past two games, which puts him in some elite company. Only eight Broncos players have had two or more sacks in back-to-back games since sacks became as an official stat in 1982.

Two of them on the list, his recent mentors — Miller and Chubb.

“I feel a lot more comfortable,” said Reed, an undrafted college free agent out of Nevada who signed with Denver in May 2019. “I feel like I’m rushing out there, being able to finish. Getting to the quarterback has been major and has spoken volumes to my comfortability of being out there on the field.”

Last season, Reed had Miller to lean on after stepping in for Chubb, who tore his ACL in Week 4. Reed finished with two sacks, 24 tackles and a whole lot of pass-rushing knowledge.

“I feel like last year was a great learning experience and catapulted me into this year,” said Reed, whose Broncos (2-4) host the Los Angeles Chargers (2-4) on Sunday.

This season, more cleats to try and fill after Miller went down with a dislodged tendon in his left foot before the opener. There to help him out is Chubb, the fifth overall pick in 2018. Chubb leads the team with 4 1/2 sacks this season.

“Chubb brings a lot of energy to the game and that’s great for everybody and the whole team really,” Reed said. “He will give his all for you every time he goes out there.”

The respect is mutual. Chubb talked in glowing terms of Reed and described his potential as “through the roof.”

“Malik’s one of those guys that I look up to,” Chubb said. “He’s in the same room as me writing everything down and I look over there and it makes me want to get on my game a little bit more. Having him come on like this is special because you saw it brewing throughout last season and for it to come to fruition now is amazing."

The next challenge for Reed and the Broncos: Applying pressure to Chargers rookie Justin Herbert, who’s been sacked 10 times.

“You can definitely tell he believes in himself and I feel like that’s half the battle,” Reed said. “Not only for quarterbacks in this league but for any player in this league. He definitely has the confidence and the ability, and he’s shown that over the first few games. We’re excited for the opportunity to go against him.”

Reed was a first-team, all Mountain West Conference player at Nevada, where he finished with 203 tackles, 22 sacks and 11 forced fumbles.

After not hearing his name called in the draft, he went to a team that's had at least one college free agent make the active roster out of training camp in 16 of the past 17 years.

“He’s just a guy that’s gotten more comfortable in the scheme,” Broncos defensive coordinator Ed Donatell said. “He has that ability to maneuver and get to the passer."

NOTES: Fangio said no Broncos have had to adjust their schedule for being in contact with O-line coach Mike Munchak, who's staying away because of COVID-19 concerns. “There was nobody on our staff that was close enough to him, long enough, to warrant missing any time,” Fangio said. ... RB Phillip Lindsay went through some drills as part of the concussion protocol, Fangio said. ... WR Tim Patrick (hamstring) worked on the side Thursday. “He was pleased with the way he worked out,” Fangio said. ... WR/KR Diontae Spencer (shoulder) didn't practice.