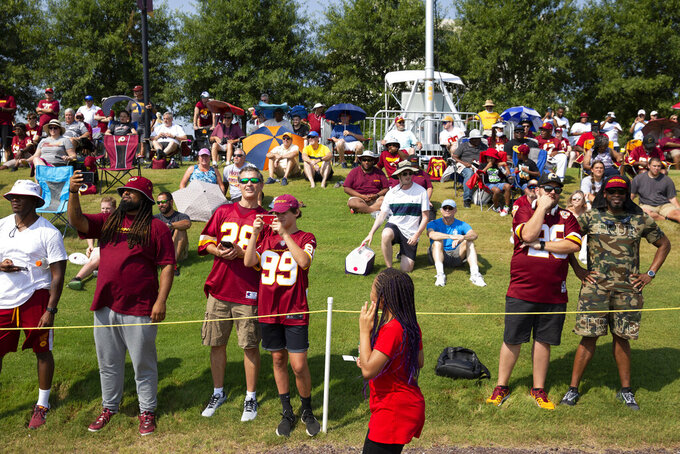 In an interview with The Associated Press at a community event coinciding with training camp in Virginia's capital, Wright said Washington is trying to be transparent with the rebranding process. He declined to reveal how many names were still under consideration.

“We have them narrowed down substantially,” Wright told The AP. “So, there’s a small set of names that have been crafted into full visuals and logos and all that stuff that we’re going back and forth on.”

The Washington Football Team is the official name for a second consecutive season after the club abandoned its old moniker in July 2020. Wright, who was hired in August, has said the new name will not have any Native American connotations or imagery.

Wright has blogged about choosing a name that honors the franchise's history, which includes three Super Bowl titles. Asked directly if a name had already been selected, he said, “I don't want to scoop our team.”

“It’s like a family heirloom and stewarding the movement of family heirloom is a weighty thing," he told Washington radio station WTOP on Thursday. "It’s incredibly important we do the best we can to steward this right.”

Long before Major League Baseball's Cleveland Indians abruptly announced on Twitter last week that they are becoming the Guardians, Washington has been focused on transparency as part of the process so that fans can understand how the final decision was reached. More than 25,000 names were submitted, with alumni, season-ticket holders, women, military members and children among the digital focus groups the team canvassed for opinions.

“We want it to be as open as it can possibly be,” Wright said. “We got a ton of input from fans over all the different stages of this process and continue to. We want people to be able to see where their input and where their fingerprints are on the entire process.”

Washington is working with creative agency Code & Theory to rebrand an organization that recently underwent an independent investigation into workplace conduct and is in the midst of a culture change from the top down. Tanya Snyder has taken over day-to-day operation of the organization for the next several months, with husband Dan focusing on a new stadium deal and other business ventures.

Wright and Tanya Snyder watched some of practice together Thursday. He called her a detailed listener and a savvy business leader who is “incredibly decisive in moments of ambiguity.”

“That sort of confident and assertive leadership is great for us in all the different things we’re navigating,” he said.

After holding training camp in Richmond from 2013-2019, there is not currently an agreement in place for Washington — whatever the name is by then — to return next year or beyond. Mayor Levar Stoney is “bullish” on Washington keeping at least part of camp in his city, adding, “I’m going to do everything I can to make sure that happens.”

Washington is looking for a new stadium site, with the lease at FedEx Field in Landover, Maryland expiring in 2027. Locations in Maryland, Virginia and the District of Columbia are under consideration.

When that stadium is done, the team is expected to hold camp there, but from 2022 until then is still up in the air. One possibility is a deal to keep camp in Richmond if somewhere in Northern Virginia is picked for the stadium, though Stoney does not see the issues as necessarily tied together.

“I don’t think they’re wedded to having football, the training camp and the stadium in the same place,” he said at Hotchkiss Field Community Center, where the team announced it was donating $75,000 for improvements. “I’d be totally fine if whatever decision they made that they at least continue their camp here in Richmond.”

Washington is doing four days of camp in Richmond this year before holding most of it at the regular practice facility in Ashburn, Virginia, near Dulles Airport.

Reigning AP Defensive Rookie of the Year Chase Young wore a mask when speaking with reporters Thursday after a training camp practice, which is required for unvaccinated players, and would not give his status.

Coach Ron Rivera, who is immune deficient after undergoing treatments for a form of skin cancer last year, said he is wearing a mask around unvaccinated players. Quarterback Ryan Fitzpatrick on Thursday said he is vaccinated.