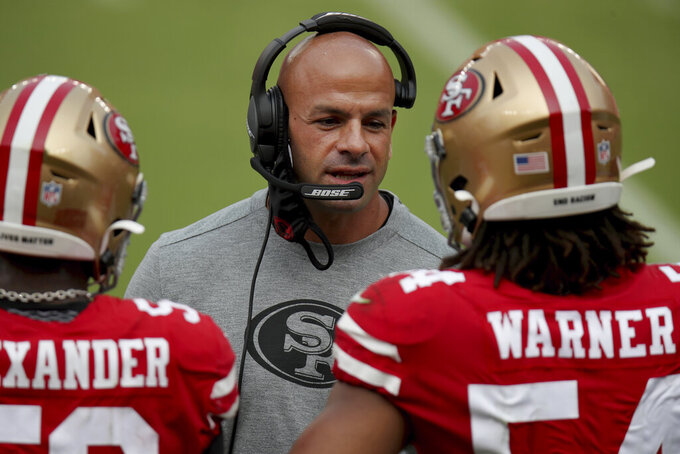 FILE - In this Sept. 13, 2020, file photo, San Francisco 49ers defensive coordinator Robert Saleh talks to players on the sideline during the team's NFL football game against the Arizona Cardinals in Santa Clara, Calif. Saleh inherited one of the worst defenses in the league when he arrived in 2017 and helped turn it into a dominant unit that helped the Niners reach the Super Bowl last season and remain in contention this season despite the string of injuries on both sides of the ball. (AP Photo/Scot Tucker, File)

Edge rushers Nick Bosa and Dee Ford were lost for the season by Week 2. The secondary has been a revolving door all season as stalwarts like Richard Sherman, Jaquiski Tartt and K’Waun Williams are among those dealing with injuries.

Through it all, the San Francisco 49ers have still managed to put together one of the league’s top defenses thanks in large part to their defensive coordinator, who is making his case to be one of the top head coaching candidates at the end of the season.

“You’ve got to give Robert Saleh an abundance of credit. You have to give him an unusual amount of credit, and I don’t think he’s getting enough credit not only here but in the league, in general,” Sherman said. “To have the injuries that we’ve had week after week after week, the setbacks week after week. ... He’s not making any excuses. He’s making great plans week in and week out and we’re making it happen. I expect him to be a head coach next year because of what he’s able to do. He’s able to rally men. He’s a leader of men and that goes a long way.”

Saleh inherited one of the worst defenses in the league when he arrived in 2017 and helped turn it into a dominant unit that helped the Niners reach the Super Bowl last season and remain in contention this season despite the string of injuries on both sides of the ball.

San Francisco (5-6) ranks in the top 10 in several key defensive categories, including yards allowed per game, yards allowed per play, passer rating against and overall efficiency by Football Outsiders as he has built on the system he learned as a position coach in Seattle and made it into his own.

“I think he just knows exactly who he is and what he wants his defense to look like in terms of our core values as a defense, playing with effort, technique, violence,” linebacker Fred Warner said. “We know exactly what we’re going to do. We’re not going to do a lot. We’re just going to do it fast and as physical as we can. That’s what makes him so great. He makes sure there’s no gray area in terms of coaching and teaching. There’s a lot of coaches out there who just coach. But he’s a great teacher.”

That kind of performance, and his leadership skills, made him a candidate for the head coaching job in Cleveland last offseason that went to Kevin Stefanski and should make him a contender for a job once again this offseason.

In a league that has struggled to hire minority coaches, the Lebanese American Saleh figures to be one of the leading minority candidates this offseason.

Saleh’s head coaching candidacy is even getting a push from politicians in his home state of Michigan. A bipartisan group of 36 lawmakers led by state Rep. Abdullah Hammoud released an open letter to Detroit Lions owner Sheila Ford Hamp suggesting she hire Saleh as the new coach to replace the recently fired Matt Patricia.

The letter called Saleh, who grew up just outside of Detroit in Dearborn, a “hometown hero.” Saleh also went to college at Northern Michigan and coached at both Michigan State and Central Michigan.

Saleh said he learned about the letter when he came off the practice field Friday and said his focus is entirely on beating Buffalo on Monday night.

“It’s really a nonissue for me,” he said. “I don’t talk about it. I don’t really even see it. I don’t have social media. I don’t look into the news. It’s probably more for family and friends to enjoy and get a kick out of than it is for me. We’re completely locked into Buffalo.”

Regardless of whether he notices the talk, other teams are noticing him. With potential job openings already in Detroit, Houston and Atlanta, Saleh figures to be on the interview circuit once again this offseason.

Coach Kyle Shanahan was selfishly pleased when the Browns passed up Saleh last season but knows he won’t be able to keep him forever.

“It’s a matter of time before he becomes one,” Shanahan said. “I keep telling him, don’t be mad at me because I know he’s going to be one eventually. I hope he stays here as long as possible. He needs to be in no rush. So hopefully people don’t figure it out and he stays here for a little bit.”