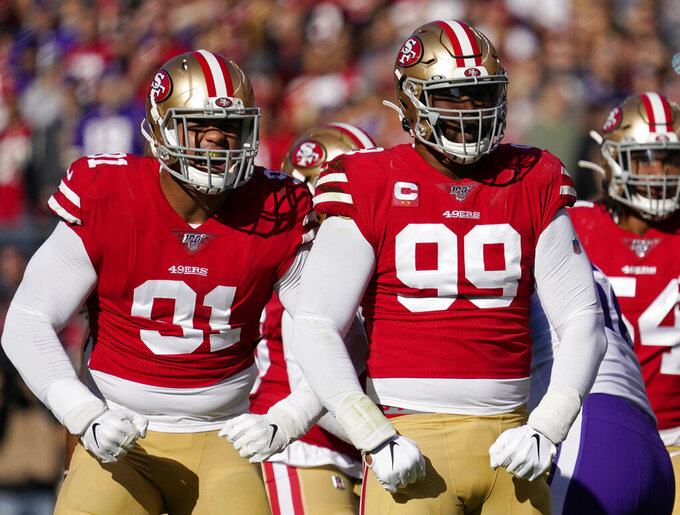 FILE - In this Jan. 11, 2020, file photo, San Francisco 49ers defensive end Arik Armstead, left, and defensive tackle DeForest Buckner (99) react to a play against the Minnesota Vikings during the first half of an NFL divisional playoff football game in Santa Clara, Calif. Armstead and Buckner have been teammates on the defensive line for seven of the past eight seasons whether in college at Oregon or in the NFL with the San Francisco 49ers. The 49ers signed Armstead to a five-year contract worth up to $85 million on Monday, March 16, 2020, and then immediately agreed to a deal to send Buckner to Indianapolis. (AP Photo/Tony Avelar, File)

Arik Armstead and DeForest Buckner were teammates on the defensive line for seven of the past eight seasons whether in college at Oregon or in the NFL with the San Francisco 49ers.

So when Armstead got rewarded with an $85 million, five-year contract in free agency from San Francisco on the first day of free agency this offseason, the news that followed was a little disconcerting.

The Niners had traded Armstead’s longtime running mate to Indianapolis for a first-round pick.

“It was of course an interesting day to say the least,” Armstead said Wednesday. “A lot of excitement of course, signing back with the Niners that definitely was what I wanted to do. Then learning about DeFo being traded was a shock to me. Trying to figure out how that happened and what went on.”

What went on was that the Niners decided they couldn’t afford to keep both their star defensive linemen under the salary cap. With Buckner owed $12.4 million on the fifth-year option on his rookie deal and looking for a lucrative long-term contract that he eventually got from the Colts, the Niners decided it made more sense to keep Armstead and get a high draft pick for Buckner that turned into his replacement, Javon Kinlaw.

Armstead said he never thought that his deal could have lead to his friend’s departure and said it will be “weird” to play without Buckner. The only other time he’s done it since the two arrived at Oregon together in 2012 came during Armstead’s rookie year in the NFL in 2015.

“I figured there would be a way we’d be able to continue playing together,” he said. “But things happened how it happened. Losing DeFo, he’s an irreplaceable player, a leader, a fixture of our organization. There definitely will be a void there. That’s not something one person will be able to fill. It’s going to be a team effort.”

The fact that the Niners kept Armstead over Buckner would have been viewed as a surprise a year ago. While Buckner had been a leader on the defense since being drafted in the first round in 2016, Armstead’s career had been a bit of a disappointment until last season.

He played only 14 games combined in 2016 and ’17 before injuries put him on season-ending injured reserve and he made little impact when healthy.

He had just nine sacks in his first five seasons and many questioned the wisdom of bringing him back in 2019 on the fifth-year option worth more than $9 million.

But that decision was validated when Armstead led the team with 10 sacks and ranked second with 35 pressures despite playing significant time on the inside. He also was a force against the run.

Armstead believes that’s only the beginning and he expects even more improvement this season when he plays on a talented line that also features defensive end Nick Bosa, speed rusher Dee Ford, the promising Kinlaw, 2017 first-round pick Solomon Thomas and the dependable D.J. Jones and Ronald Blair.