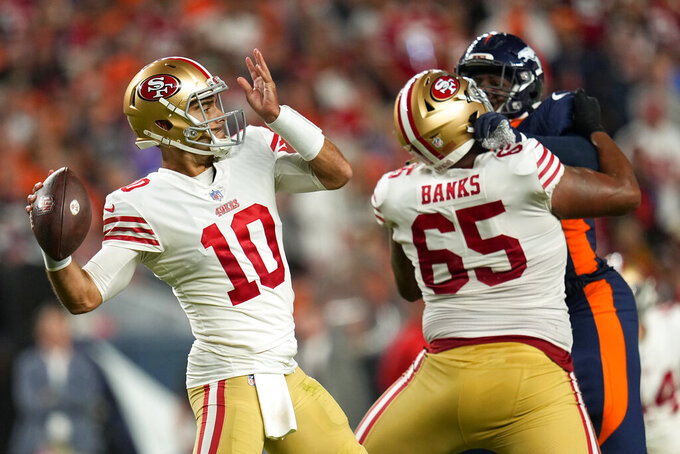 OPENING LINE: 49ers by 1 1/2, according to FanDuel SportsBook.

TURNOVER DIFFERENTIAL: Rams even; 49ers minus-1.

RAMS PLAYER TO WATCH: RB Cam Akers is coming off his most productive game since going down with an Achilles injury before the 2021 season. Akers had 12 carries for 61 yards and a TD last week against Arizona.

49ERS PLAYER TO WATCH: QB Jimmy Garoppolo's first start after Trey Lance went down with a season-ending injury was a dud. He went 18 for 29 for 211 yards, but missed on some chances at big plays early in the game, turned the ball over twice and stepped out of the end zone for a safety.

KEY MATCHUP: Aaron Donald vs. 49ers OL. The Niners have done a decent job limiting Donald's impact the past few years. Donald has one sack in his past five games against San Francisco after having 10 1/2 the previous six meetings. But the Niners have a brand new interior of the offensive line this year and will be missing All-Pro LT Trent Williams, making the task even harder this time around.

STATS AND STUFF: Donald got his 100th sack last week and leads the team with 14 QB pressures. ... WR Cooper Kupp leads the NFL with 28 catches. He had at least 11 catches and 120 yards receiving in his past three appearances on “Monday Night Football.” ... The Rams are 29-13 in regular-season road games under McVay. ... WR Allen Robinson has been slow to fit in with his new team, managing just seven catches for 88 yards. He also dropped a probable TD pass last week at Arizona. ... K Matt Gay is perfect on four field goals and seven extra points. ... ILBs Ernest Jones and Bobby Wagner have 47 combined tackles in three games. Wagner also shares the team lead with Donald in sacks (2). ... San Francisco forced nine three-and-outs last week, the most in any game since 2014. ... The Niners are the 28th team since 2000 to allow 28 or fewer points to the opposing offense through three games and the only one to have a losing record after doing it. ... San Francisco has passed on 46.6% of plays, the third-lowest rate in the NFL. ... The Niners have scored 10 points in two of their first three games. ... San Francisco has five turnovers and one takeaway in its two losses compared to three takeaways and no turnovers in its one win. ... The Niners have allowed an NFL-low 3.94 yards per play. ... Niners K Robbie Gould's 1,847 career points are tied with Phil Dawson for the 12th most in NFL history. ... San Francisco RB Jeff Wilson Jr. has had at least of 100 yards from scrimmage the past two weeks and is averaging 92.4 yards from scrimmage in his 11 career starts. ... Niners DE Nick Bosa is one of four players with at least one sack in each of the first three games of the season.

FANTASY TIP: San Francisco versatile playmaker Deebo Samuel was shut down as a runner last week with five carries for 6 yards. But he fared better as a receiver with five catches for 73 yards and could be used more that way again this week.