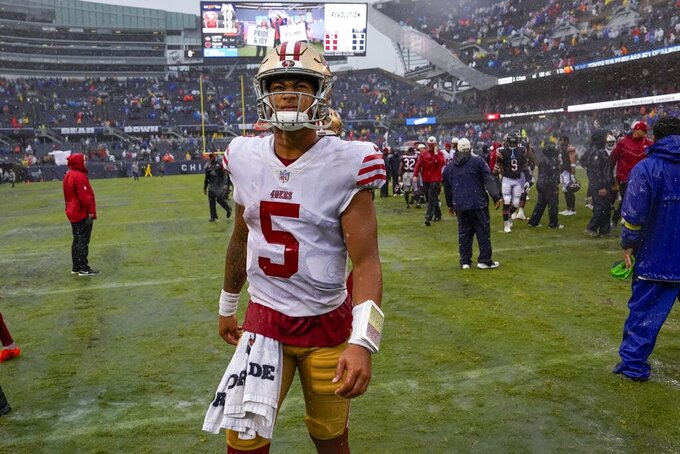 SANTA CLARA, Calif. (AP) — The San Francisco 49ers lost more than a game in a sloppy season-opener at Chicago.

The Niners lost starting running back Elijah Mitchell to a knee injury in the 19-10 loss to the Bears on Sunday. Mitchell is expected to be sidelined for about two months.

“He was pretty down,” coach Kyle Shanahan said Monday. “For obvious reasons were down for him. Elijah went through a lot last year. It’s well documented, the injuries he had. He really worked hard this offseason. He was feeling really good going into that game. I thought he looked really good before he got hurt.”

This marks the second straight season when the 49ers lost their top running back to a knee injury in the season opener. Raheem Mostert went down with a season-ending injury in Week 1 last year, leading to Mitchell becoming the main back as a rookie when he became the fifth different player to lead San Francisco in rushing in five years under Shanahan.

Mitchell had 963 yards rushing at an average of 4.7 yards per carry last year, despite dealing with a series of injuries. He was excited to be healthy going into this season but lasted only one game.

Jeff Wilson Jr., the 2020 rushing leader, figures to get a heavy load with Mitchell out. Rookie Tyrion Davis-Price, a healthy scratch on Sunday, also should be in the mix, along with undrafted rookie Jordan Mason.

“We’re always been comfortable with Jeff just because of his experience and what he’s done here,” Shanahan said. “We know what we’re going to get. The other two guys, they made our team for a reason. They’re two talented players that we think can help us a lot running the ball. But they got to grow up fast.”

But Shanahan has always been able to find capable running backs.

The other issues on Sunday are more pressing, from a shaky performance by Trey Lance in his first game since being named the starting quarterback, to 12 penalties to breakdowns on defense that led to big plays.

Deebo Samuel runs. There was a lot of talk this offseason about whether the Niners would continue to rely heavily on using Samuel as a running back. Shanahan didn't shy away from it in the opener. Samuel had eight carries for 52 yards, including a 6-yard run for San Francisco's only TD.

Penalties. The Niners were extremely undisciplined, getting penalized 12 times for 99 yards. The penalties handed the Bears five first downs in the game, including drive-extending personal fouls on third down by linebackers Dre Greenlaw and Azeez Al-Shaair. Greenlaw had two personal fouls.

Safety Talanoa Hufanga. The second-year player stepped into the starting lineup this season and was very busy in the opener. He had a team-high 11 tackles, including two for losses, and also intercepted a pass.

Lance completed only 13 of 28 passes in wet conditions for 164 yards. He missed an open Tyler Kroft on a potential TD throw in the first half, took a sack to knock the Niners out of field position and then threw a late interception that helped seal the loss. Lance did show a few bright signs with a couple of big throws and 54 yards rushing but did nothing to quiet skeptics who wonder if Jimmy Garoppolo should regain his starting job this season.

Shanahan hopes TE George Kittle (groin) will be able to practice Wednesday after missing the opener. ... DT Javon Kinlaw sprained his ankle in the game but was able to return.

4. San Francisco allowed only four completions to wide receivers. The problem was a few of those became big plays. Former Niner Dante Pettis got wide open on a broken play that led to a 51-yard TD from Justin Fields that changed the tide of the game. Byron Pringle had a 22-yard catch and Equanimeous St. Brown got free for an 18-yard TD catch.

The 49ers host Seattle in their home opener on Sunday looking to avoid their first 0-2 start since 2017.