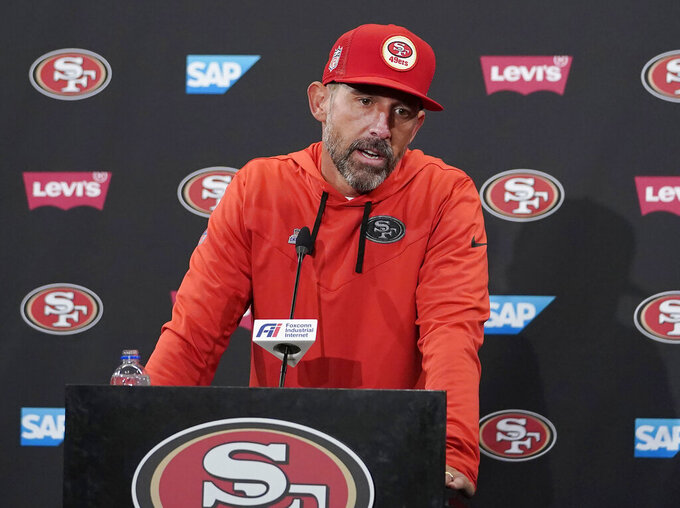 SANTA CLARA, Calif. (AP) — When San Francisco coach Kyle Shanahan began his first news conference after the 49ers returned from their bye, the recitation of injuries was briefer than usual.

The week off came at a good time for the banged-up Niners, who got several key players back from injuries they hope will help them make a big playoff push in the second half of the season.

Among the players able to practice without limitation on Wednesday after being sidelined by injuries before the week off were versatile receiver Deebo Samuel, running back Elijah Mitchell, receiver Jauan Jennings, fullback Kyle Juszczyk, linebacker Azeez Al-Shaair and backup offensive lineman Colton McKivitz.

“This is the grind of the season now, the stretch we’re about to go on,” linebacker Fred Warner said. “We need all our weapons. It’s great to see some familiar faces out there. ... We’re going to need them.”

San Francisco also could get cornerback Jason Verrett back for the first time since a season-ending knee injury in Week 1 of the 2021 season and linebacker Dre Greenlaw, who has been out with a calf injury.

Both were limited at practice Wednesday, along with defensive lineman Jordan Willis, who had his practice window opened to return from IR.

Shanahan said while he and his coaches spent a little time during the bye doing some self-scouting and other work, the priority was getting healthy and getting rest.

“We needed to get away a little, physically and mentally,” he Shanahan said. "The main thing is when you come back, you’re itching to come back and people are itching to get you out of their house too and it’s not really how you felt the day before the bye week, so everyone’s got a lot of energy and you’re fresh to go and we’re ready to grind again.”

Like every team midway through a grueling NFL season, the Niners still do have some key players missing. The most notable are defensive tackle Arik Armstead, who has been bothered since September by injuries to his foot and ankle and cornerback Emmanuel Moseley, who went down with a season-ending knee injury last month.

Defensive tackle Javon Kinlaw remains on injured reserve with a knee injury and no timetable for his return, and defensive end Samson Ebukam missed practice after hurting his quadriceps on Monday.

But overall the Niners feel as if they are in good position to make another second-half run similar to last season when they won seven of their last nine games to make the playoffs and go to the NFC title game for the second time in three seasons.

“We know what we need to do from here on out," tackle Mike McGlinchey said. “Last year we had the opposite experience of just getting in barely and getting to the NFC championship and had to run the whole table pretty much to get there. We know how to do it each and every way.”