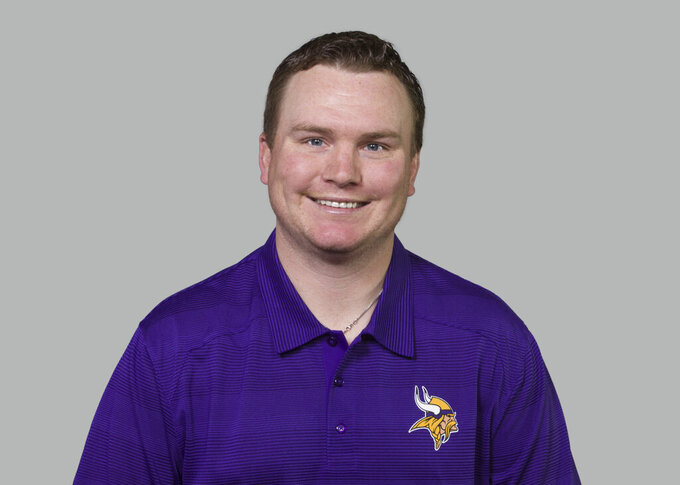 THIS SUBSTITUTES FOR NY156 - FILE - This is a 2014 photo of Adam Zimmer of the Minnesota Vikings NFL football team. Former Minnesota co-defensive coordinator Adam Zimmer, an NFL assistant for 17 years and the son of previous Vikings head coach Mike Zimmer, has died. He was 38. Corri Zimmer White, his younger sister, confirmed the death on her Instagram account on Tuesday. Adam Zimmer died on Monday, Oct. 31, 2022, she said. (AP Photo/File)

Corri Zimmer White, his younger sister, confirmed the death on her Instagram account on Tuesday. Adam Zimmer died on Monday, she said. No cause was cited.

Adam Zimmer was working remotely this season as an offensive analyst for the Cincinnati Bengals, after eight years with the Vikings under his father. When Mike Zimmer was fired in January, the majority of his staff was also dismissed.

Mendota Heights Police Capt. Wayne Wegener confirmed that officers found a deceased man after responding to a welfare check on Monday afternoon, at a home near Vikings headquarters where Adam Zimmer was living. There was nothing suspicious about the death, Wegener said, and the investigation was turned over to the medical examiner for determination of cause.

“We are heartbroken to hear about the passing of Adam Zimmer. Adam was a kind, respectful man, and over his years in Minnesota, it was evident he cared tremendously about his family, his players, his fellow coaches and the Vikings front office staff. Our thoughts are with Mike, Corri, Marki and the entire Zimmer family,” Vikings ownership said in a statement.

Adam Zimmer broke into the NFL in 2006 with the New Orleans Saints. He was hired by the Kansas City Chiefs in 2010 as an assistant linebackers coach and spent the 2013 season with the Bengals as an assistant defensive backs coach in Mike Zimmer's final season there as defensive coordinator.

“Our organization has had the privilege of knowing and working with the Zimmer family for 15 years. We have the highest regard for Mike and Adam, and we are incredibly saddened by this tragic news,” Bengals owner Mike Brown said in a statement. "Mike and Adam were more than just coaches for us — they were friends. Our thoughts and prayers are with the Zimmer family.”

When the Vikings hired Mike Zimmer in 2014, he brought his son with him to coach linebackers. Adam Zimmer was promoted to co-defensive coordinator with Andre Patterson in 2020.

“Disregard the familial connection. It’s really just about him being a good coach,” former Vikings linebacker Chad Greenway said in an interview with The Associated Press on Tuesday. “It wouldn't have mattered who the head coach was. Adam was a good coach no matter what.”

Though he was older than Adam Zimmer, Greenway quickly developed a trust in his new position coach while trying to learn a new defense in his ninth NFL season.

“He was respectful of the game and the career that I had before that he got there,” Greenway said. “He was always working with you and not coaching at you, always trying to make the individual better and the team better. He was really smart when it came to the scheme, but more importantly he was a great person who always cared about you as a person."

Mike Zimmer’s wife, Adam Zimmer’s mother, Vikki Zimmer, died unexpectedly at age 50 in 2009. That was Adam Zimmer's last year with the Saints, when they went on to win the Super Bowl.

“We had fond memories of Adam from the four years he spent in our organization as an assistant coach,” the Saints said in a statement. “Adam was knowledgeable, hard working, well-liked by everyone he came into contact with, and enthusiastic. During his time with the Saints, he quickly developed into an excellent coach.”

Corri Zimmer White said in her Instagram post that Adam Zimmer told her “countless times” how he loved watching her be a mother to his 1-year-old twin nephews.

“My brother was one of my best friends, especially after my mom died, we became so close. He was always there for me and always the first to show up and volunteer at my foundation events,” she said. “I never even had to ask.”

Early in the pandemic, when NFL facilities shut down and coaches conducted offseason work remotely, Adam Zimmer and his other sister, Marki Zimmer, sequestered with his father at his 160-acre ranch in Kentucky.

Adam Zimmer provided on-site tech support for Mike Zimmer's internet connection and video conference trouble, and the two of them took advantage of the proximity to fine-tune the team's defensive scheme.

"If I can’t get it figured out, I can text him and say, ‘Come up here and fix this,’” Mike Zimmer said in May 2020. “At night, after dinner or something, we’ll sit down and have some crazy idea and we’ll say, ‘OK, we can talk about it tomorrow with the rest of the defensive coaches.”