Against Dolphins, Patriots playing for week off in playoffs 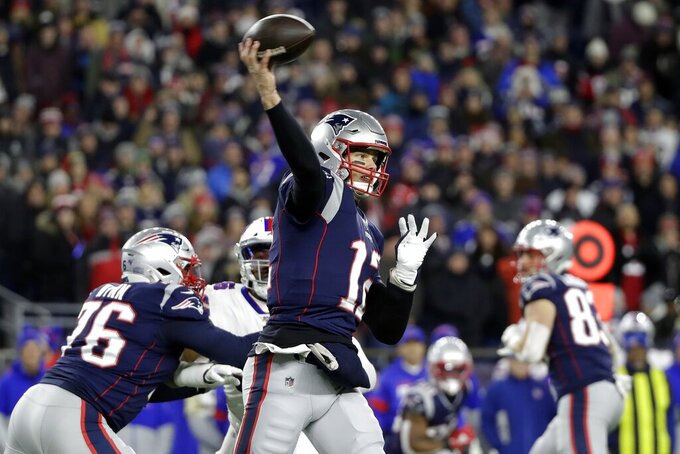 FOXBOROUGH, Mass. (AP) — That the New England Patriots actually have something to play for in their regular-season finale against Miami is a bit of a surprise.

When the defending Super Bowl champions opened with eight straight victories, thoughts turned to the possibility of another 16-0 regular season. A loss to Baltimore in Week 9 ended that and effectively cost New England the chance at the No. 1 seed in the AFC. The Patriots clinched a playoff berth in Week 15 and the division in Week 16, but they could need a victory over the Dolphins to earn a first-round bye.

The Patriots (12-3) would clinch the No. 2 seed with a victory or a Chiefs loss or tie; Kansas City plays the Los Angeles Chargers on Sunday, also at 1 p.m. That means the Patriots can't take the last week of the season to rest up or heal up for the playoffs.

Still, with a victory over the overmatched Dolphins (4-11), they would advance to the divisional round. In the New England locker room, that's gives the game a postseason feel.

“That’s it, it’s playoff time now," linebacker Elandon Roberts said. “If you win this game, you know what’s in front of you. If you lose, you know what you’ve got to do, too. It’s do or die. Period."

It would be New England's 10th straight first-round bye, and their 14th of the Tom Brady and Bill Belichick era.

The running game has helped the Patriots get back on track after back-to-back losses at the start of December.

After gaining a season-high 175 yards on the ground against Cincinnati, New England put up 143 in a balanced attack against the playoff-bound Bills. Sony Michel ran for 96 yards in the game, just missing becoming the Patriots' first 100-yard rusher this season.

The Patriots beat the Dolphins 43-0 on Sept. 15, snapping a two-game losing streak in Miami. It was New England's biggest shutout in the rivalry, and second to the undefeated 1972 Dolphins' 52-0 victory in a series that dates to 1966.

Antonio Brown caught a touchdown pass, but that was the only game he played this season, as he wore out his welcome with the Steelers, Raiders and Patriots.

Brady has never really lost a game to the Dolphins in New England. Miami won in Foxborough in 2005, when he was pulled from a meaningless, season-ending game, and again in 2008, when Brady was injured.

For the Dolphins, 2019 has been the year of an offseason roster dismantling, a historically bad start and talk that they were tanking. Through it all, rookie coach Brian Flores kept the locker room together.

“No matter what changes, no matter what happened to our team, he always said, 'We are going to go out there and try to win every game,’” linebacker Jerome Baker said. “He’s a class act, and all of us believed it.”

A month into the season, the Dolphins had been outscored 163-26, the worst differential after four games since at least 1940. They lost their first seven games but have since gone 4-4 and been outscored 202-232.

“I just think back to when we were 0-7 or whatever it was,” quarterback Ryan Fitzpatrick said, “and the spirit at practice — the way the guys were still coming in and working hard and buying in and believing.

“We’ve only won four games, and it has been a fight. But it has been a lot of fun these last nine or 10 weeks to work with these guys.”

At 37, Fitzpatrick seems to be on an upswing. In last week’s overtime win against the Bengals, he threw for 419 yards, the highest total in his 155-game career.

“I truly don’t care about that,” Fitzpatrick said. “I mean, I know it’s cool that my kids are excited about their fantasy teams. But winning is what it’s all about.”