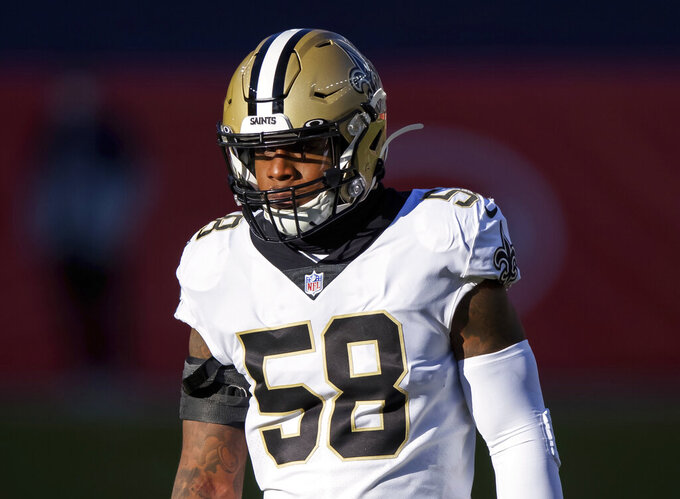 FILE - In this Nov. 29, 2020, file photo, New Orleans Saints linebacker Kwon Alexander (58) lines up against the Denver Broncos during the first half of an NFL football game in Denver. The Saints are bringing back Alexander. Agent Drew Rosenhaus has confirmed that Alexander signed a one-year contract with New Orleans worth up to $3 million. (AP Photo/Justin Edmonds, File)

The New Orleans Saints are bringing back outside linebacker and former LSU standout Kwon Alexander, who spent the offseason rehabilitating an Achilles injury from last December.

Agent Drew Rosenhaus confirmed to The Associated Press that Alexander signed a one-year contract worth up to $3 million on Tuesday, the 2017 Pro Bowler's 27th birthday. ESPN first reported the deal.

Alexander started 12 games in 2020 — five for San Francisco before being traded to New Orleans, where he made seven starts. Alexander made 57 solo or assisted tackles, forced two fumbles, recovered two fumbles, broke up four passes and had one sack last season.

Alexander began his NFL career with Tampa Bay, which drafted him in the fourth round in 2015.

In 66 career starts, Alexander had nine forced fumbles, 8½ sacks, seven interceptions and four fumble recoveries to go with 471 total tackles. He also has been credited with 20 QB hits.

Alexander's return could give New Orleans more continuity at linebacker, where Demario Davis was the only returning starter as training camp opened.

Davis hailed Alexander's return on social media, writing on his verified Twitter account: “I’m on GO mode!!!!!!! It just went to another level!!! We waited all summer for this."

NOTES: WR Tre'Quan Smith and DB Keith Washington Jr. left practice on Tuesday with undisclosed ailments. Washington appeared to hurt his right arm after crashing to the turf while defending a long pass. Smith appeared to have a leg injury but did not need help walking.