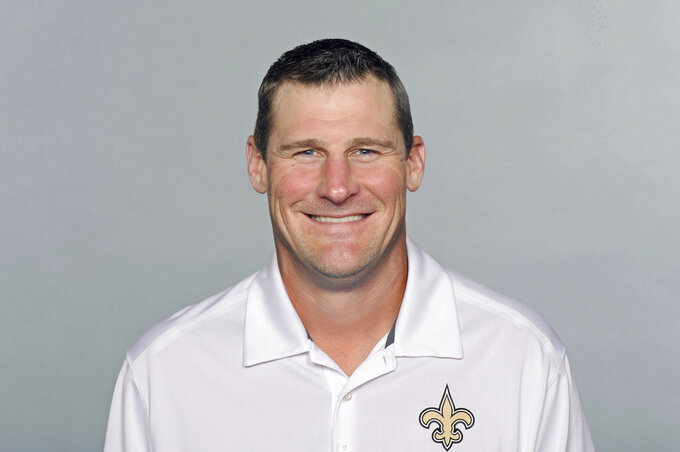 FILE - This is a 2016 file photo showing Dan Campbell of the New Orleans Saints NFL football team. The Detroit Lions have agreed to terms with Dan Campbell to be their coach. The Lions announced the agreement with the New Orleans Saints tight ends coach on Wednesday, Jan. 20, 2021, one day after formally introducing Brad Holmes as their general manager. (AP Photo/File)

The Detroit Lions landed the coach they coveted from the start of their search by hiring Dan Campbell.

The Lions tweeted a photo of the former New Orleans Saints tight ends coach signing his deal Wednesday, one day after the team formally introducing Brad Holmes as their general manager. Campbell signed a six-year contract, according to a person familiar with the situation who spoke to The Associated Press on condition of anonymity because terms of the deal were not released.

“With more than 20 years of experience as both a coach and player in the National Football League, Dan knows the rigors of professional football and what it takes to be successful,” team owner Sheila Ford Hamp said in a statement. “He will help promote the culture we want to establish across our organization, while also bringing with him high energy, a respect for the game and an identity with which everyone can align themselves.”

While Detroit did make Holmes one of four Black general managers in the NFL and team president Rod Wood thanked Rod Graves of the Fritz Pollard Alliance on Tuesday, the franchise followed a league-wide trend of hiring white head coaches.

The Lions were one of seven teams looking for a head coach during this hiring cycle and so far only the New York Jets did not pick a white man. The Jets hired Robert Saleh, the son of Lebanese parents.

Philadelphia and Houston, meanwhile, still have an opening for a head coach. The NFL has just four minority coaches: Pittsburgh's Mike Tomlin, Washington's Ron Rivera, Miami's Brian Flores and Saleh, who is the first Muslim American coach in the league.

“The issue is not in the sufficiency of numbers; the problem is in the limited number of leadership opportunities given," said Graves, executive director of the Fritz Pollard Alliance, which champions diversity in the NFL. “The disparity in opportunities is mind-boggling. It is unfortunate that the performances of coordinators like Eric Bieniemy, Todd Bowles, Byron Leftwich, Leslie Frasier and Joe Woods may not meet what appears as ‘ever-evolving standards’ for becoming a Black head coach in the NFL."

The 44-year-old Campbell, who also had the title of assistant head coach with the Saints, has 11 years of experience in the NFL as a coach and 11 as a player.

Campbell, who is from Clifton, Texas, was a standout tight end at Texas A&M and was drafted in the third round by the New York Giants in 1999. He had 91 career receptions for 934 yards and 11 touchdowns with the Giants, Dallas, Detroit and New Orleans.

Campbell, who played for the Lions from 2006 to 2008, is the first former player to lead the franchise since Hall of Famer and two-time NFL champion Joe Schmidt was Detroit's coach from 1967-72.

“Dan’s passion for this opportunity was evident throughout our interview process," Lions president Rod Wood said. “When we began the search for a head coach, it was imperative that we find the right leader who values our commitment to building a winning culture based on organizational alignment and collaboration. The leadership Dan has exemplified throughout his football career has prepared him for this next step, and we are excited to support him as our new head coach.”

The Lions finished 5-11 last season — their 13th season with double-digit losses this century — and have only one playoff victory since winning the 1957 NFL title.