Back on field, Smith eyeing possibilities for Patriots TEs 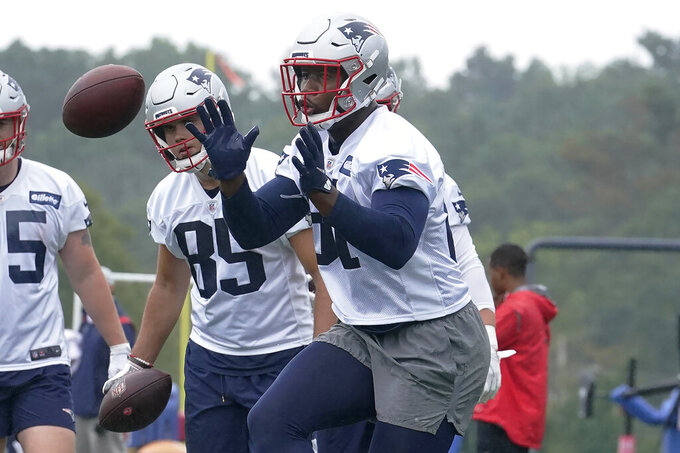 FOXBOROUGH, Mass. (AP) — Jonnu Smith struggled to contain his tears earlier this offseason shortly after signing a free-agent contract with the Patriots.

Those emotions were again on display Wednesday as the tight end walked off the field after his first training camp practice with his new team. Helmet in hand, with each step Smith's toothy smile grew wider before he thrust his fist in the air.

“Man, that’s just — I don’t even know,” said Smith, who inked a four-year $50 million deal with the Patriots. “Somebody was yelling my name. I was just showing love, you know what I mean? It just feels so good to get out here, man.”

After leaving the Tennessee Titans, the only NFL team Smith had played for since being drafted in 2017, he had his offseason interrupted after he sustained a leg injury during New England's first minicamp practice last month. Back on the field Wednesday, without restriction and with fans watching for the first time since 2019, it helped him fully absorb what he called “an offseason to remember.”

“I felt it," he said. "It’s a different kind of energy out here in Foxborough. I’m just glad to be a part of it.”

Smith was also a key part of a Patriots offseason spending spree targeted at upgrading several areas of their roster.

One of those areas was the passing game, which suffered in 2020 largely because of a lack of dependable pass catchers for quarterback Cam Newton to target, especially at tight end. In two seasons without Rob Gronkowski, production had fallen off considerably. Since Gronk’s initial retirement prior to the 2019 season, a group that included Ben Watson, Devin Asiasi, Ryan Izzo, Matt Lacosse and Dalton Keene combined for just 54 catches for 672 yards and three touchdowns.

That prompted Bill Belichick to bring in Smith and former Chargers tight end Hunter Henry, along with receivers Nelson Agholor and Kendrick Bourne.

The hope is that the two-pronged attack of Smith and Henry, who have combined for 121 catches and 10 touchdowns over the past two seasons, can give the quarterback — be it Newton or rookie Mac Jones — several options in the red zone and also open up things on the perimeter of the field.

Smith likes the possibilities he and Henry bring. He thinks they can be just as unstoppable as Rob Gronkowski and Aaron Hernandez were for Tom Brady.

“Boston ‘TE' Party. Let’s bring it back. Hell of a player. Hell of a tight end. Hell of a man," Smith said of Henry. "We’re gonna do great things together.”

Henry said that though he was a little concerned after the Patriots signed both players, he believes they can co-exist.

“We talked about it. I definitely addressed the issue, but this offense is built for tight ends," Henry said. "Obviously, they have had a lot of success with two tight ends. We’re completely different players from the guys in the past. ... They have a tremendous legacy here, so we’re not trying to be those guys. We’re trying to be ourselves. Just looking forward to the challenge ahead.”

Smith recently posted pictures of himself working out with Newton and both have already been in Foxborough for a few weeks getting a jumpstart on camp.

He sees the same potential working with Jones as well.

“Mac-sonville.′ That’s what I call him. Mac-sonville. He’s from Jacksonville. So I call him Mac-sonville,” Smith said. “I’m going to be honest, man. I didn’t expect Mac to have the kind of swagger that he got."

But what may tie it all together for Smith has nothing to do with football. This summer he and his wife welcomed the birth of their third child — and first daughter. She, he said, is what makes his new football city feel like home.

Her name, too, is emblematic of her dad’s new beginning.

NOTES: Cornerback Stephon Gilmore, one of eight Patriots to open camp on the active/physically unable to perform list, made an appearance on the sideline wearing workout clothing late in practice and could be seen chatting with LB Dont’a Hightower and CB J.C. Jackson. Gilmore missed New England’s entire offseason program as he looks to improve his $7 million base salary for 2021. … LB Kyle Van Noy and OT Trent Brown were listed on the PUP list ahead of camp, but both were on the field and participating on Wednesday.