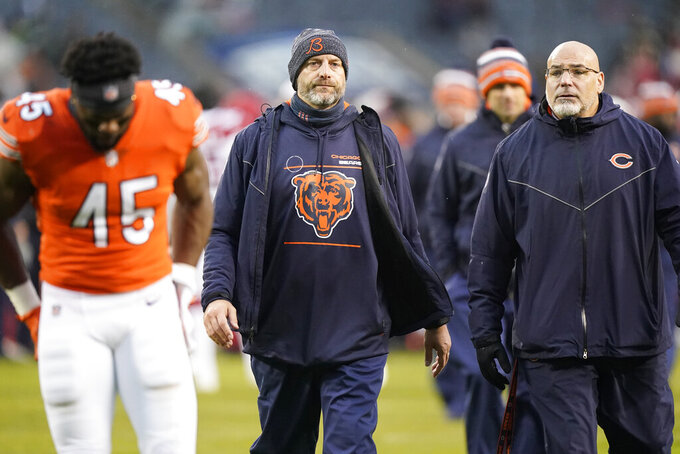 Chicago Bears head coach Matt Nagy, center, walks off the field with Joel Iyiegbuniwe after the team's 33-22 loss to the Arizona Cardinals during the second half of an NFL football game Sunday, Dec. 5, 2021, in Chicago. (AP Photo/Nam Y. Huh)

Hicks is missing a fourth straight game with an ankle injury. The Bears listed him as questionable on Friday’s injury report but ruled him out Saturday.

However the Bears are getting Mario Edwards Jr. back. Edwards is active for Sunday’s game. He hasn’t played since Oct. 31 because of injured ribs.

The Bears also had announced Saturday that cornerback Teez Tabor wouldn’t play against the Packers because of an illness.

Dalton, who has an injured left hand, had started the Bears’ past two games because rookie quarterback Justin Fields was out because of broken ribs. Fields is starting Sunday’s game with Nick Foles backing him up.

Linebacker De’Vondre Campbell is available for the Packers. Green Bay activated him off the reserve/COVID-19 list Saturday.