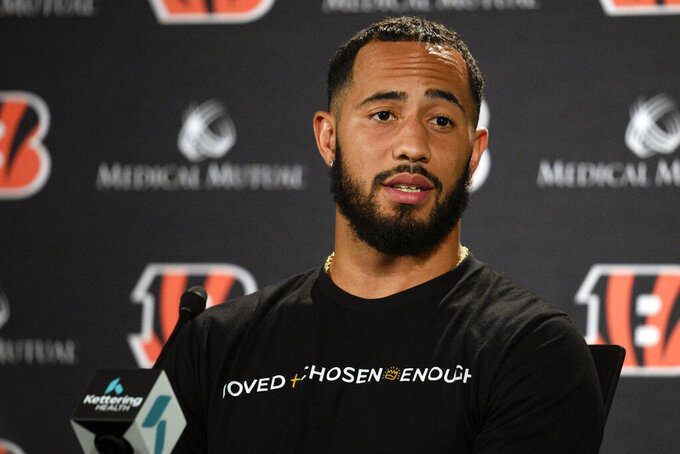 Bengals safety Jessie Bates said playing under the franchise tag this season will give him a chance to show NFL teams — including his current one — what he is worth.

The 25-year old Bates reported to training camp on Tuesday and signed a one-year contract for $12.9 million after staying away amid the contract dispute. He said he loves the game too much to sit out for the season, which was his other option.

“I’m looking at this as an opportunity to prove I’m one of the best safeties in the league," he said in his first public comments Wednesday.

“I just thought it would be a good time for me to come back a week before the preseason (ends) to be able to start building relationships with guys that just got here, guys that are gonna be making the team these next couple weeks,” he said.

Asked why he wasn't able to reach a long-term deal with the Bengals, Bates said “that’s not my question to answer. It’s a great opportunity for me to present who I am and what I’m about to this franchise and other teams as well."

Negotiations stop now, but he'll be free to negotiate after the season with the Bengals and any other team.

He got a warm welcome at the team facility, even if some were surprised to see him.

“You felt the energy in the locker room when he came back,” quarterback Joe Burrow said. “It was a nice jolt.”

Team owner Mike Brown said before training camp that a hinderance in signing anyone else to a long-term deal is that the Bengals have to prepare to pay Burrow and star receivers Ja'Marr Chase and Tee Higgins when their rookie contracts expire in the next few years. All will command expensive deals, whether in Cincinnati or somewhere else.

Looking ahead, the Bengals had drafted safety Dax Hill, who played well in the first two preseason games.

Bates said he will do some conditioning and not be a full participant yet in practice, which on Wednesday included the first of two joint sessions with the visiting Los Angeles Rams. He said he'll be ready for the Sept. 11 regular-season opener against Pittsburgh.

“Jessie is a professional. Jessie is a great dude. Jessie is about all the right stuff,” Cincinnati coach Zac Taylor said. “There’s a business side of things, and that plays into it some. Really pleased with how Jessie handled it and came back at a good time for us to be able to get great work before we play Pittsburgh in Week 1. Just really appreciate the way he handled it.”

Burrow participated in the scrimmage with no limitations after having an appendectomy a month ago.

He said he wouldn't play in the final preseason game against the Rams on Saturday.

“I could go out there and play, but I’m not where I want to be yet," he said.

“He’s looked really sharp. He’s thrown a wide range of balls and that, to me, is all I need to see,” Taylor said. “He knows his body better than I do, but I have seen plenty to have a high degree of confidence in him. I’m sure he will know when he’s fully 100%.”